Asus knows how to make a good 7 inch Android tablet. Google tapped the company to build the Nexus 7 in 2012, and it’s still one of the best 7 inch tablets on the market. The relatively low starting price of $199 makes it even more appealing.

But Asus decided to go even lower. So the company recently launched another 7 inch tablet. It’s called the Asus MeMO Pad ME172V, and it sells for just $149 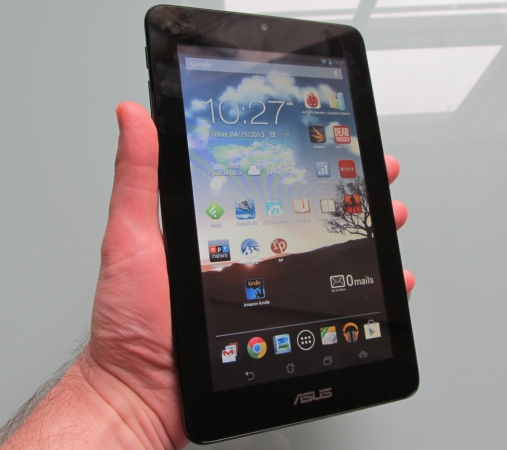 If you can afford the Nexus 7, there’s absolutely no reason you should consider the cheaper model from Asus. But a penny saved is a penny earned, and if you really want to save $50, Asus has you covered with its latest tablet.

The company is primarily marketing this tablet in developing nations where a 25 percent lower price can make a big difference. But the MeMO Pad ME172V is also available for budget tablet shoppers in the United States.

Asus loaned me a tablet for the purposes of this review.

The Asus MeMO Pad is about the same size and shape as the Google Nexus 7. But it has a bumpier texture on the back, a lower resolution display, a slower processor, and an older version of Google’s Android operating system.

On the bright side, unlike the Nexus 7, the Asus MeMo Pad does have a microSD card slot. 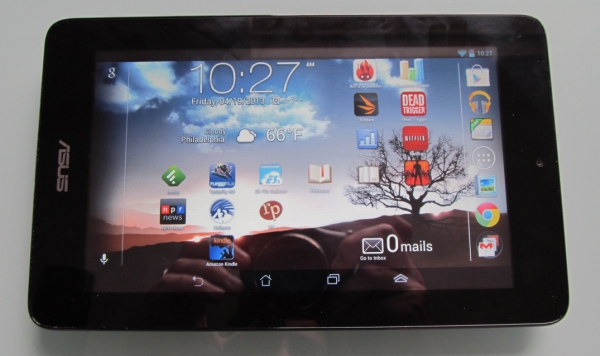 It has 1GB of RAM and 16GB of storage, and features a micro USB port, microSDHC card reader, and a front-facing 1MP camera. The MeMO Pad supports 802.11n WiFi.

There’s no rear camera, no Bluetooth or GPS, and the tablet runs Android 4.1 with a few Asus tweaks including a custom notification tray.

Asus also offers a 10 inch MeMO Pad. At $299, the MeMO Pad Smart ME301T is the cheapest 10 inch tablet Asus offers, but it has a faster processor and a better display than the 7 inch MeMO Pad.

So while the 10 inch tablet costs twice as much as the 7 inch model, it offers a much better value proposition. It’s one of the best 10 inch tablets in its price range.

Arguably you could say the same about the MEMO Pad ME172V since there aren’t as many tablets in its $149 price range at all. But for $10 more you can get an Amazon Kindle Fire with a faster processor and a better display, or for a little more than that you can get a Nexus 7. And that’s without bringing cheap tablets from Chinese resellers into the picture. 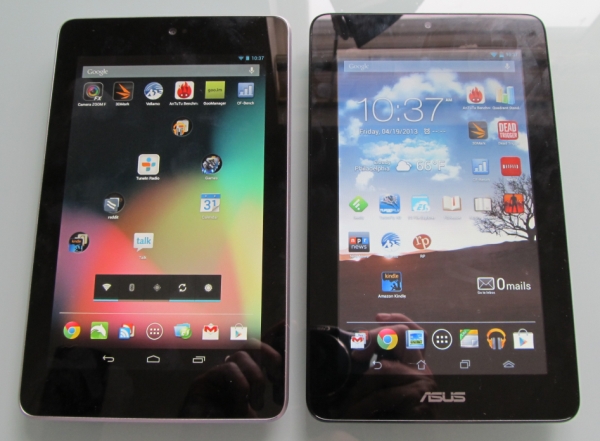 It has edge-to-edge glass which covers the 7 inch screen. While the Nexus 7 has a metallic strip around the edge of the tablet, the sides of the MeMO Pad are covered in glossy plastic.

The demo unit Asus loaned me is black, but the company also offers pink and white models. 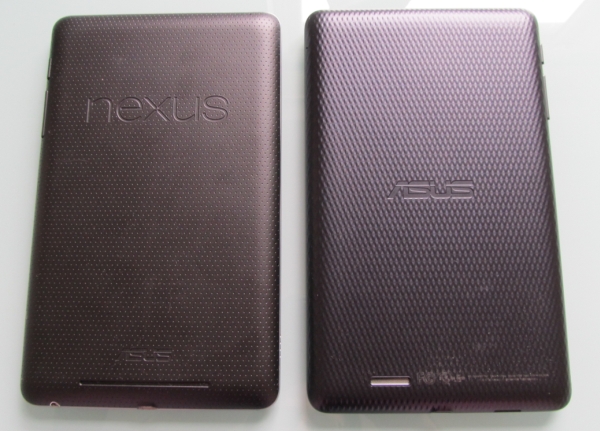 The rear panel is covered by a bumpy plastic surface which helps give you something to grip while holding the tablet. Unlike the Nexus 7, which has a soft, almost rubbery plastic back, the MeMO Pad has a hard plastic shell. There’s a single speaker on the back.

At the bottom you’ll find a micro USB port and a microSD card slot.

There’s a headphone jack at the top of the tablet, and on the left side there’s a power button and volume rocker.

While the headphone jack and buttons have been moved, you could probably forgive someone for mistaking the MeMO Pad for a Nexus 7… until you place the two tablets side-by-side and turn on the display. 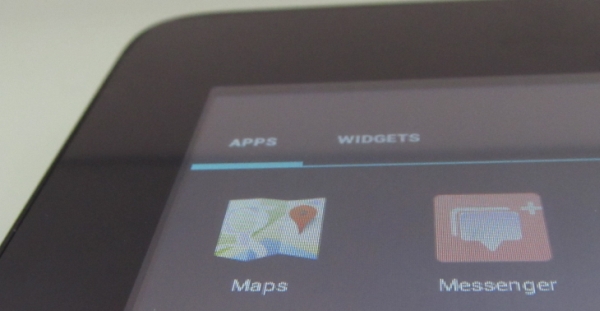 You can look at the tablet head-on, and the screen looks OK. But if you look close, you can tell there’s a bit of space between the glass and the screen — so everything looks recessed a bit. It’s like the icons, text, and other elements are a few millimeters below your finger when you touch the screen. When you touch the glass on the Nexus 7, on the other hand, it seems like you’re actually touching the icons directly.

A bigger problem is that colors start to look washed out if you tilt the MeMO Pad 7. The problem isn’t too pronounced if you hold the tablet in portrait orientation and tilt it from left to right. But if you’re holding the tablet in landscape mode and tilt the tablet so that the Asus logo is further away from you than the camera, it almost starts to feel like you’re looking at a photo negative.

This is something you’ll see on a lot of laptop computer displays. But it’s not as big a problem on a laptop, since you typically only need to look directly at the screen from one angle. 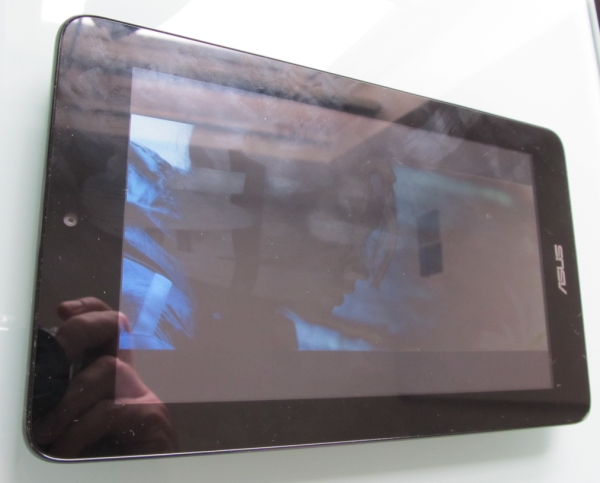 But you hold a tablet in your hand and you may tilt it while playing a game with motion detection, shift your grip while reading a book or watching a movie, or want to watch a video with a friend. In any of those situations, a tablet with poor viewing angles can turn into a slab of useless plastic. 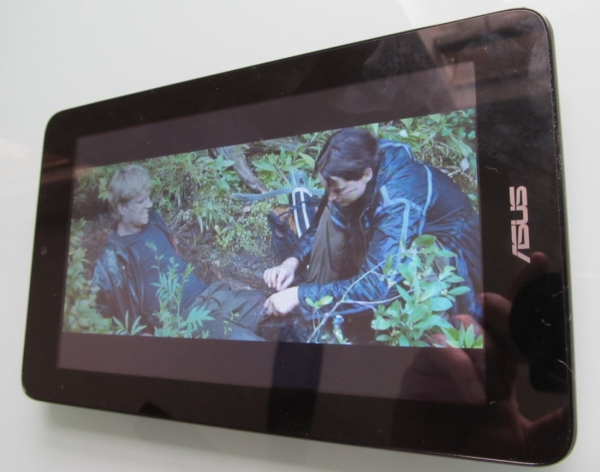 At a time when many 7 inch tablets have 1280 x 800 pixel displays, I’m not surprised to see Asus shave a few dollars off the price of this tablet by choosing a lower resolution 1024 x 600 pixel screen which doesn’t look as sharp. But TFT displays with poor viewing angles have no place in tablets… not even cheap ones.

Another big difference between the $149 MeMO Pad and the $199 Nexus 7 is the processor. The cheaper tablet has a 1 GHz WonderMedia WM8950 ARM Cortex-A9 single core CPU, while the Nexus 7 has a 1.2 GHz NVIDA Tegra 3 quad-core CPU.

In case you couldn’t guess, the Nexus 7 scores much, much better in benchmarks. So does the Hyundai T7, a 7 inch tablet with a Samsung Exynos 4412 quad-core CPU which sells for around $150.

That doesn’t mean the MeMO Pad ME172V is too slow to be useful. It’s just not bleeding edge. In my tests, it scored almost as well as a first-generation Amazon Kindle Fire or B&N NOOK Tablet, both of which have 1 GHz dual-core TI OMAP 4 processors. 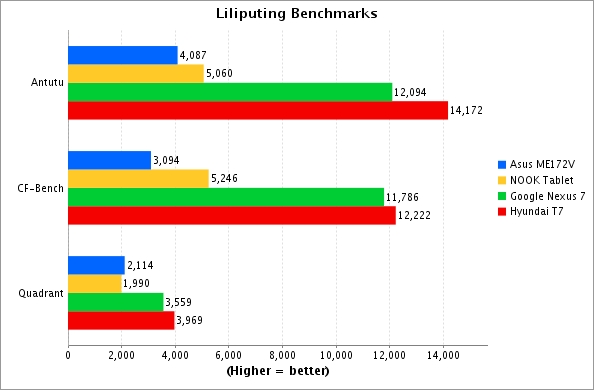 Benchmarks only really tell you how a tablet will perform under very specific circumstances. In terms of real-world performance, I had no problems streaming HD videos over the internet, opening web pages, or even playing 3D video games such as Dead Trigger on this tablet. 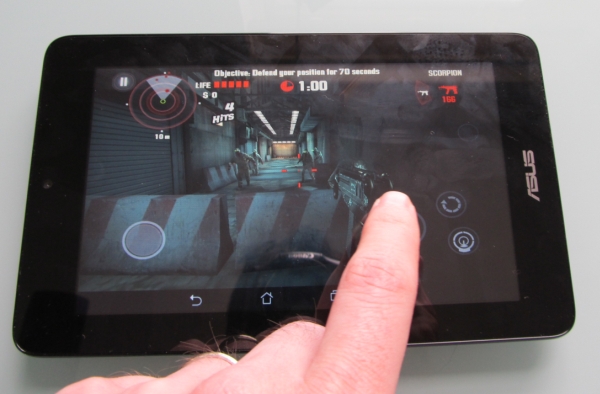 But the truth is that the vast majority of Android apps don’t need a blazing-fast processor to run. So while the WM8950 processor isn’t nearly as fast as some other chips on the market, it’s probably fast enough to do almost anything you’d want to do on a tablet. 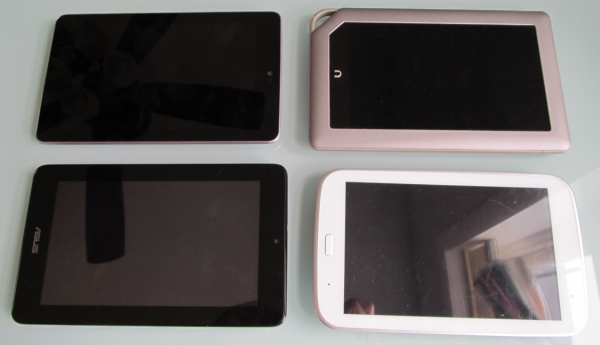 The MeMO Pad comes with the Google Play Store preloaded, which means you can download and install thousands of apps, games, books, movies, and more. But you may have trouble finding some apps in the Play Store.

For instance, the Play Store things the TuneIn Radio app isn’t compatible with this tablet, so when you look it up on your device the app won’t show up. If you go to the Play Store website and try to install it, the store will tell you that the app’s not available for the ME172V.

There may be other apps that cannot be easily installed from the Play Store, but that’s the only one I noticed while testing the tablet. I got around the problem by installing the NPR News and Radio Paradise apps so I could listen to my favorite online radio stations. 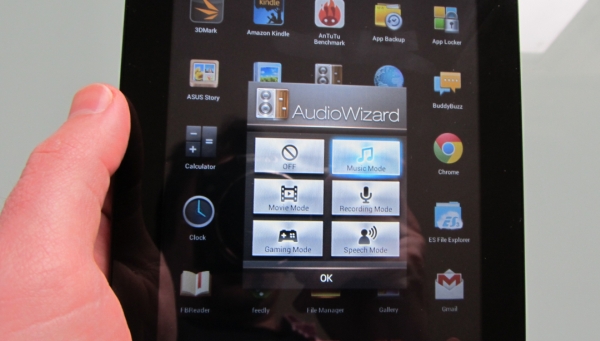 The built-in speaker is nothing to write home about, but I was able to crank up the volume and listen to music or new while working in my office or preparing food in the kitchen, so I have no complaints. Just don’t expect too much from a mono speaker built into a small tablet.

Asus does include an AudioWizard app which lets you adjust the properties of the built-in speaker for music, movies, games, speaking, or recording. It does seem to help, although it’d be nice if you could customize the settings a bit in case you don’t necessarily want more bass while listening to music. 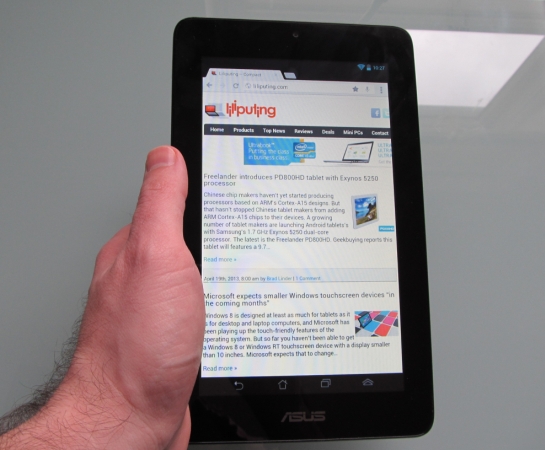 For the most part Android on an Asus tablet looks a lot like Android on a Nexus tablet. The company doesn’t customize Android nearly as much as competitors like Samsung or HTC. But Asus does make some changes.

The MeMO Pad comes preloaded with a few apps the Asus Story app for managing photo albums, the BuddyBuzz chat app, an app backup utility, and a few other apps.  You can also choose whether to use the standard Android keyboard or an Asus keyboard which, among other things, includes a dedicated row of number keys so you don’t have to push several buttons before typing a number. 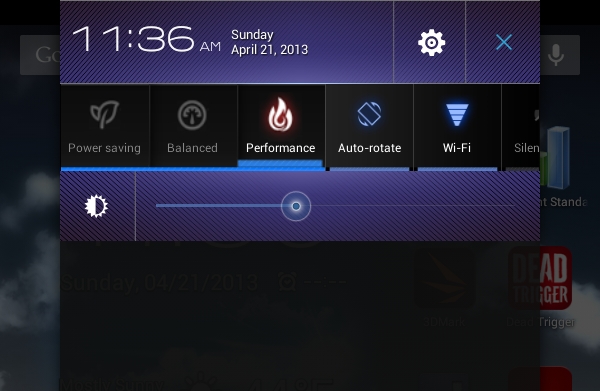 The Android notification area has also been tweaked with quick access to toggles for WiFi, screen rotation, audio, and brightness, as well as some custom power settings. You can choose between power saving, balanced, or performance modes.

Asus says the 16Whr battery in the tablet should provide up to 7 hours of battery life, and from my tests, that seems about right.

I’ve spent several hours at a time reading an eBook on the tablet, while the power level dropped from around 100 percent to about 60 percent. It loses a bit more power when left idle overnight than some tablets I’ve tested, but with light usage, you could probably go a few days without plugging in this tablet. 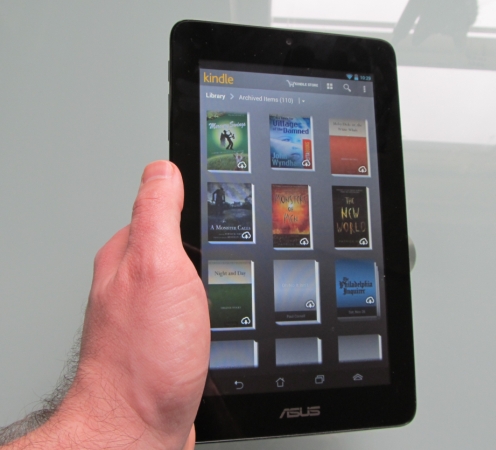 One thing I’ve noticed is that it takes longer to charge the MeMO Pad ME172V than some other tablets. I don’t have exact figures to offer here, but I’ve spent a lot of time charging Android phones and tablets over the past few years, and it feels like the ME172V needs to be connected to a power source a bit longer than most in order to top off the battery.

If you’re looking for a 7 inch tablet with a decent screen, a zippy processor, and the ability to run most apps, buy the Google Nexus 7.

While the Nexus 7 doesn’t have a microSD card slot or a rear-facing camera, it’s faster, easier to look at, and in my opinion feels better in your hands than the Asus MeMO Pad 7. If you really want a rear camera and microSD card slot, the Samsung Galaxy Tab 2 (7.0) is a good option. 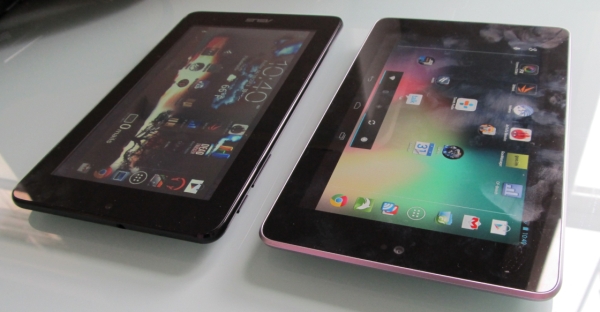 There are plenty of other choices in the small tablet space, including models from Amazon, Barnes & Noble, Samsung, and Chinese device makers such as Hyundai. Most of those devices offer a better user experience than the MeMO Pad ME172V.

It’s nice to see companies trying to offer dirt cheap tablets. But the MeMO Pad ME172V isn’t enough cheaper than the competition to justify the compromises Asus made with this tablet.

I could live with the relatively slow processor, but in 2013, I’d have a hard time recommending anyone spend money on a tablet that doesn’t have an IPS or similar display with wide viewing angles.