The first 8 inch Windows tablet from Asus is a model with an Intel Atom processor and a digital pen for writing and drawing with pressure-sensitive input. The Asus VivoTab Note 8 launched earlier this year and has a list price of $330, although you can almost always find one for a lower price.

But what if you don’t need the pen support?

Meet the Asus VivoTab 8 (M81C). It’s a new 8 inch Windows tablet with an Intel Atom Bay Trail processor, but no digital pen and a few other differences which mean it’ll probably sell for even less than the already-affordable VivoTab Note 8 when it hits the streets. 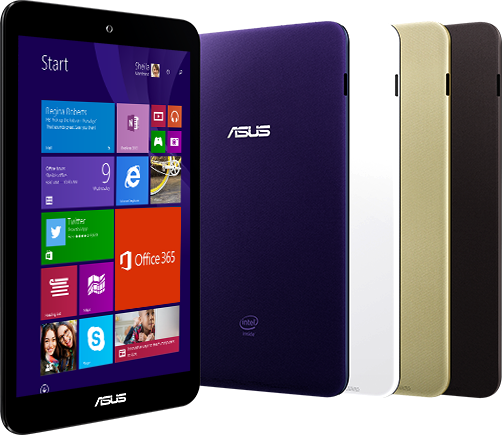 While the VivoTab Note 8 has 2GB of RAM and 32GB to 64GB of storage, the newer tablet will only be available with 32GB of built-in storage and will come with 1GB or 2GB of RAM.

In other words, for the most part the new tablet has specs that are pretty close to those of the VivoTab Note 8… but different enough that this tablet will likely be a bit cheaper.

Other features include stereo speakers, a microSD card reader, and a body that’s a little slimmer than that of the Note 8. The Asus VivoTab 8 measures 8.3″ x 4.9″ x 0.35″ and weighs 11.6 ounces. The tablet will be available in black, white, purple, or gold, and it also seems to have slimmer screen bezels than the VivoTab Note 8.