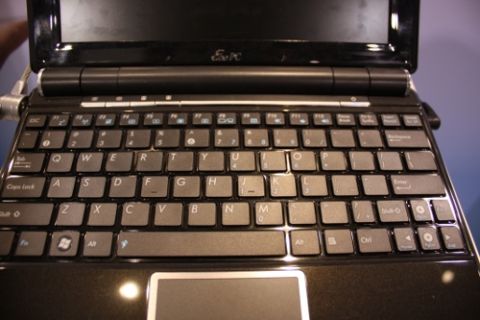 One of the top complaints I’ve heard over the past year about various Asus Eee PC netbook models is that the keyboard is set up awkwardly. For some reason Asus decided it would be a good idea to locate the shift key on the right side of the keyboard to the right of the up arrow, which causes many touch typists to accidentally hit the up arrow when they’re aiming for the shift key.

But as I mentioned the other day, Asus has heard your complaints and is beginning to roll out new models with improved keyboards. The first Eee PC I spotted with the new keyboard layout was the Eee PC T101H, which is the 10 inch touchscreen tablet-style netbook Asus launched on Tuesday evening. But Laptop Magazine’s Joanna Stern snuck onto the CES floor last night and spotted 2 new machines with the new keyboard, which are most likely modestly upgraded versions of the Asus Eee PC 1000HA, and Eee PC 1000H.

Both keyboards have a slightly larger right shift key than before, and it’s been moved to the left of the up arrow. Asus has also done away with the old school concave keys, instead using a new “chiclet” design which looks a lot like a MacBook keyboard. I’m honestly not a big fan of the chiclet design and I wish Asus had just moved the shift key while keeping the key shape the same. The Asus S121 and Asus N10J both have keyboards with concave keys and a properly placed right shift key, so the company clearly knows how to do it.

When I get onto the show floor this morning I’ll try to take a few photos myself and try typing on the keyboard to see if it’s comfortable.

8 replies on “Asus launches line of netbooks with improved keyboards”