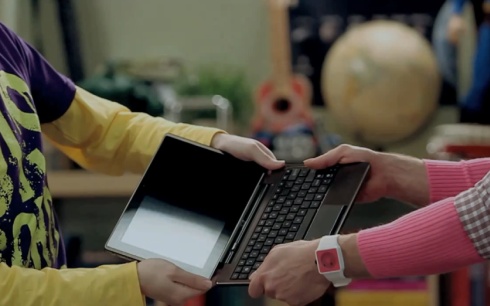 The Asus Eee Pad Transformer is expected to hit store shelves in Taiwan this week, and it’s due out in the US in April. So it’s not surprising that Asus is starting to promote the 10 inch Android tablet with the optional detachable keyboard which transforms the device into a laptop. What is surprising is the form that promotion is taking.

Asus posted the first in a series of “The Eee Pad Story” videos on YouTube and Facebook today. The three minute video is a parody of The Big Bang Theory, but as far as I can tell, someone forgot to write jokes for the skit.

The video runs about three minutes and doesn’t really tell us anything about the tablet other than the fact that it has a detachable keyboard — information which is pretty easily conveyed in a single photograph.

For what it’s worth, the Transformer has a 1 GHz NVIDIA Tegra 2 dual core processor, a 10 inch, 1280 x 800 pixel display and runs Google Android 3.0 Honeycomb. It measures about half an inch thick, and it’s the first of four Android tablets Asus hopes to bring to market this year.

Hopefully the next episode will be a bit more compelling. You can check out the first ep after the break.