Asus has revealed its first smartwatch. As expected, the Asus Zenwatch is an inexpensive Android Wear device with rounded corners (and a square screen). But in addition to running Google’s software which lets you pair the phone with an Android 4.3 or later device, Asus has included a number of its own apps and features.

You can use the ZenWatch as a remote control and viewfinder for your phone’s camera. There’s a find-my-phone feature. And the watch shows upcoming appointments from the What’s Next” app on Asus phones and tablets with the Asus ZenUI interface.

Asus says the ZenWatch will sell for 199 Euros in Europe. 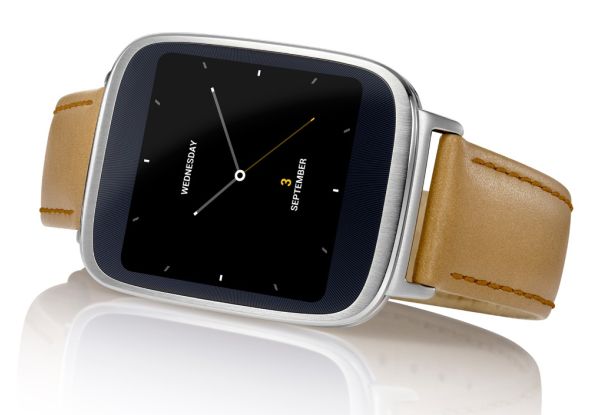 The ZenWatch also has a heart rate monitor and 9-axis sensor and pairs with the Asus ZenUI Wellness app to work as an activity and fitness tracker.

Asus offers a range of custom watch faces that you can and the watch comes with a stitched-leather wrist strap that has a quick-release clasp.

The watch face itself has curved glass over a touchscreen. It features a 1.63 inch, 320 x 320 pixel display. It’s powered by a Qualcomm Snapdragon 400 processor and features 512MB of RAM and 4GB of storage.

The ZenWatch pairs with a smartphone over Bluetooth 4.0, features an IP55 water-resistant case, and has a 1.4Whr battery.

Other things you can do with the ZenWatch include using it to unlock your phone, tablet or other devices or control presentations. If the watch beeps to give you a notification while you’re in a public place you can also mute the device just by covering it with your hand.

Priced at 199 Euros, the ZenWatch might not be quite as inexpensive as Asus had led us to believe when the company said it would be more affordable than the competition… but at least it isn’t more expensive than the LG G Watch or Samsung Gear Live.