Last month Asus started to show off a new 10 inch Android tablet with a 10.1 inch, 1920 x 1200 pixel display. Now the company is giving the tablet a new name… and announcing two versions. 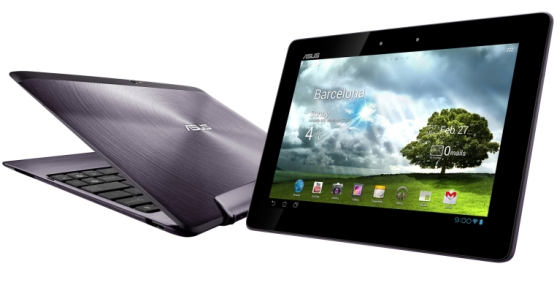 Asus will offer a WiFi-only model with an NVIDIA Tegra 3 quad-core processor. But at the time that the company was developing the project, that chipset couldn’t handle 4G LTE mobile broadband, so Asus is using a 1.5 GHz Qualcomm MSM 8960 Snapdragon S4 dual-core chip in the LTE version of the tablet. Both versions will run Google Android 4.0.

There’s also an optional keyboard docking station that lets you transform the tablet into a laptop. Since the keyboard also has its own battery, you can also expand the battery life from 10 hours with the tablet alone to up to 16 hours with the dock.

The Transformer Infinity measures 10.4″ x 7.1″ x 0.33″ and weighs 1.3 pounds. The dock is roughly the same size, and weighs 1.2 pounds, meaning that both items together weigh less than many netbooks.

Asu will offer the Transformer Pad Infinity in gray and gold color options.

When we first saw this tablet Asus was calling it the Asus Eee Pad Transformer Prime TF700T. The name was kind of a mouthful, which probably explains the new moniker.

It also looks like Asus is dropping the Eee branding from all of the company’s new tablets. The first Eee products were the Eee PC netbooks and nettops which first hit the streets in 2008 and 2009.