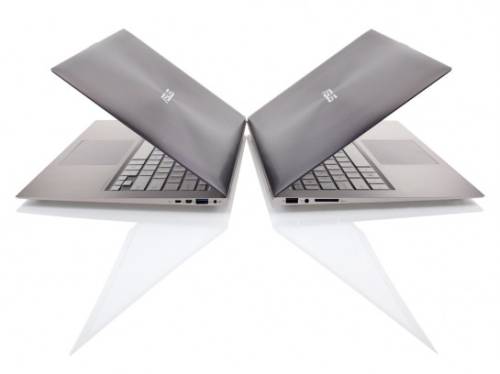 Asus has introduced a new line of thin and light laptops which will go on sale October 12th for $999 and up. These are the Asus UX21 and Asus UX31 laptops the company first introduced in June, but Asus is giving the laptops a new name: Zenbook.

The Asus Zenbook line will come in 5 different flavors. Two notebooks will be available with 11.6 inch displays, while there will be three models with 13.3 inch screens.

These will be among the first notebooks to launch as part of the Intel ultrabook platform. Intel defines the product category as laptops that weigh less than 3 pounds, measure less than 0.8 inches thick, and cost less than $1000. While the cheapest of the new Zenbooks definitely fits the bill, higher-end models will run as much as $1449.

Asus says the laptops resume from sleep in 2 seconds, and the laptops automatically backup your data to the solid state disk when battery power reaches 5 percent capacity so that you won’t lose any data in the event of an unexpected shutdown.

The Zenbooks feature the latest version of the Asus Super Hybrid Engine technology which adjusts the CPU speed and other settings to prioritize battery life or performance depending on what you need. Asus CEO Jerry Shen says the idea is to deliver a smartphone-like, instant-on, ultraportable experience in a notebook-like form factor.

All of the laptops also measure just 0.11 inches thick at the thinnest point and feature metallic finishes. The 13.3 inch model also features a high resolution 1600 x 900 pixel display, which sets it apart from all of the other ultrabooks I’ve seen so far. Asus is also the only company I’m aware of that’s even making an 11.6 inch ultrabook model.

Here’s a run-down of the different models: