The Asus Fonepad is either a huge phone or a small tablet, depending on how you want to look at it. Either way, it’s an Android device with a 7 inch display, WiFi and HSPA+ connectivity, and the ability to make phone calls.

In other words, it’s a tablet for people who aren’t sure they want to buy a phone and a tablet, or a phone for people who think phone screens are way too small. Or something. 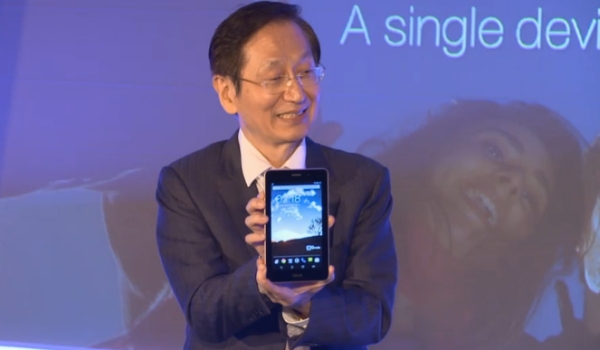 The Fonepad weighs about 12 ounces and measures 0.4 inches thick, making it similar in size to a Google Nexus 7 or Amazon Kindle Fire.

The tablet features a 1280 x 800 pixel IPS display, a 1.2 GHz Intel Atom Z2420 processor, 1GB of RAM, and 16GB of storage. It has a microSD card slot for additional storage, and a front-facing 1.2MP camera front-facing camera and a 3MP rear camera. 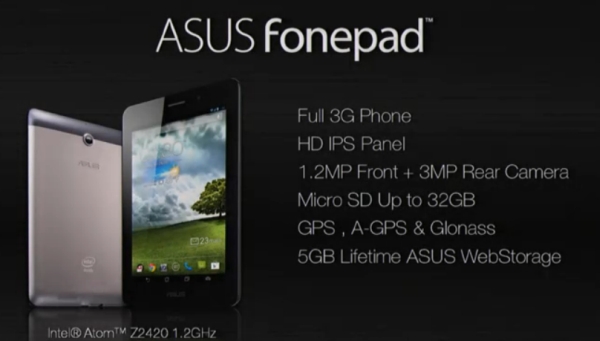 Asus says the tablet gets up to 10 hours of battery life. The Fonepad will be available in two colors: gray or gold.

This isn’t the only category-blurring device Asus has. The company’s Padfone Infinity takes a different approach toward the same problem by letting you use dock a 5 inch smartphone into a 10 inch tablet dock when you want to use a larger screen and get longer battery life.

Prices are expected to start at $249 for a Fonepad with 8GB of storage. That model will be available in March. Come April, a European model with 16GB of storage will launch for 219 Euros.

Despite Asus giving a price in US dollars for the base model of the phone, there are currently no plans to sell the Fonepad in the United States.

10 replies on “Asus introduces the Fonepad, a 7 inch smartphone/tablet for $249”