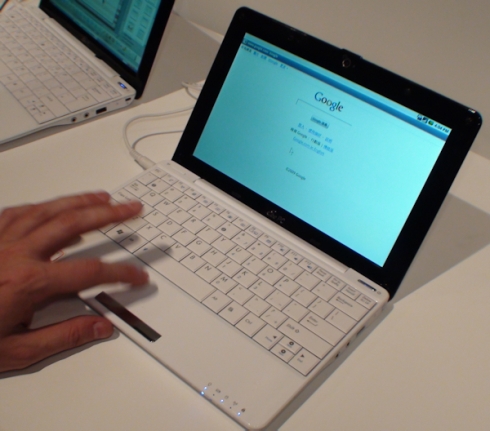 On the first day of the Computex trade show in Taiwan, Asus has introduced a new Eee PC netbook that’s unlike anything the company has produced so far. It looks a lot like the Asus Eee PC 1008HA Seashell with its thin and light design and large keyboard. But while the 1008HA features an Intel Atom CPU and runs Windows XP, the new model has a 1GHz Qualcomm Snapdragon processor and uses the Google Android operating system.

TweakTown says the operating system feels like it’s meant for smaller devices, which shouldn’t be surprising since it was initially designed for cellphones. But the Snapdragon processor features hardware video acceleration for 720p HD video. It also has embedded GPS and a 3G modem that should work with most mobile broadband standards around the world. And because of its low power consumption, the computer doesn’t generate much heat and there’s no need for a fan in the computer.

As jkkmobile points out, one of this netbook’s killer features is the fact that the Snapdragon platform allows for “always connected” internet access. In other words, even when the computer is in suspend mode, you can receive incoming emails, instant messages, and other notifications.

Qualcomm is showing off so-called Smartbooks from other vendors at Computex as well, but this is certainly one of the highest profile devices to use the new platform, thanks to the name Asus has built for itself in the netbook space.

You can check out videos from jkkmobile and Tweaktown after the break.