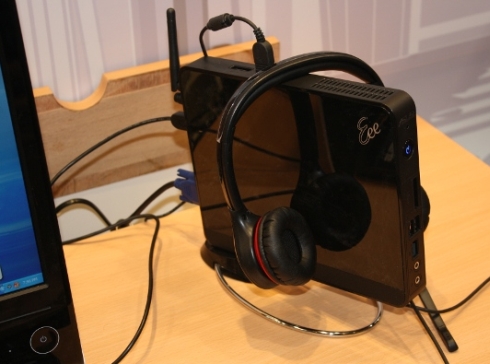 At first glance, the Asus Eee Box EB1007 looks exactly like every other nettop that Asus has released in the past year or so. It’s a small, thin desktop PC that looks more like a Nintendo Wii than a fully functional computer. But on the inside, the EB1007 packs the latest and greatest in low power, decent performance chips.

The nettop features either a 1.66GHz Intel Atom D410 single core or D510 dual core processor, 2GB of RAM and a 160GB hard drive. It’s also capable of handling 1080p HD video playback, which means it either has a Broadcom Crystal HD video accelerator or a dedicated video card. My money’s on the recently launched next-generation NVIDIA ION platform, since Asus has a history of cramming ION graphics into its notebooks, nettops, and all-in-one PCs.