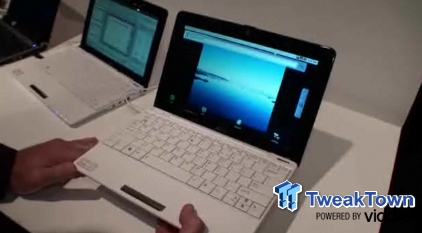 Asus teased a few journalists and bloggers with a prototype of a netbook running Google Android and powered by a Qualcomm Snapdragom processor on the eve of Computex in June. But the prototype hasn’t been seen since, and according to PC World, it may never see the light of day. Asus CEO Jerry Shen reportedly says he doesn’t see a clear market for so-called “smartbooks” which feature low power ARM processors and run Linux, Windows CE, or Google Android instead of Windows XP, Vista, or 7.

Of course, with Google downplaying Android as a netbook operating system and preparing to launch the Google Chrome OS for netbooks soon, it might not be that surprising that Asus and other companies are having second thoughts about bringing netbooks running Android to market.

But the bigger question is whether customers are looking for always-on, laptop-style devices capable of connecting to 3g wireless networks. I mean, if that was where the description ended, the answer would be a resounding yes. But while these smartbooks are likely to sell for low prices of $200 or less up front, customers will likely have to pay $40 to $60 a month to use them, which drives up the price significantly.

Add to that the fact that an ARM-based device isn’t going to be able to run the Windows apps that many people are used to, such as Office or Photoshop, and smartbooks could be a tough sell. Of course, if they’re positioned as alternatives to smartphones instead of companion devices that you’re supposed to carry around in addition to a laptop and a cellphone, perhaps they could pick up some traction.

I have little doubt that if smartbooks take off as an industry segment, Asus will jump all over it. But over the last few years Asus has been more of an innovator than a follower. If Shen doesn’t see a market for smartbooks, I’m inclined to give his words some weight.

In related news, Asus announces its second quarter earnings yesterday, showing a net loss. Portfolio reports that Asus is banking on a series of product launches in the second half of the year to help the company recover.

8 replies on “Asus has no plans to launch an ARM, Android-based smartbook anytime soon”