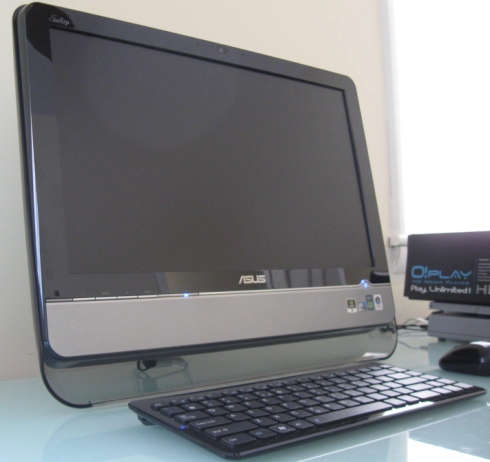 The Asus Eee Top ET2002 is an all-in-one desktop with the computer components and display sharing a single case. The computer has a large 20 inch, 1600 x 900 pixel display and packs a 1.6GHz Dual Core Atom 330 processor.

It’s also one of the first all-in-one computers from Asus to feature NVIDIA ION graphics, so while the ET2002’s basic components aren’t that different from those found in a typical netbook, the computer can handle HD video and some other high performance graphics tasks.

Unlike some all-in-one desktops from Asus and other computer vendors, the ET2002 doesn’t have a touchscreen display. But if you plan to use this computer in your office instead of your living room or kitchen, you probably won’t miss it.

The unit Asus sent me to review has 2GB of RAM, a 320GB hard drive, a DVD-RW burner, 802.11b/g/n WiFi, Ethernet, 6 USB ports, an HDMI input and comes with a wireless mouse and keyboard.

The Asus Eee Top ET2002 is an all-in-one desktop computer. In other words, the motherboard, processor, hard drive, and disc drive are all built into the same case that houses the display. Effectively, it’s like buying a computer that comes in one piece instead of two (not counting the mouse, keyboard, and any other peripherals you may need). Of course, Asus isn’t the first company to release an all-in-one desktop. The computer bears a more than passing resemblance to the Apple iMac line of desktop computers. But while it almost felt silly to mention the Asus Eee Top ET1602 which I reviewed earlier year in the same breath as an Apple iMac, the ET2002 has a much nicer build quality than the 15.6 inch ET1602 and probably wouldn’t embarrass you at all when you have your Mac fanboy friends over. 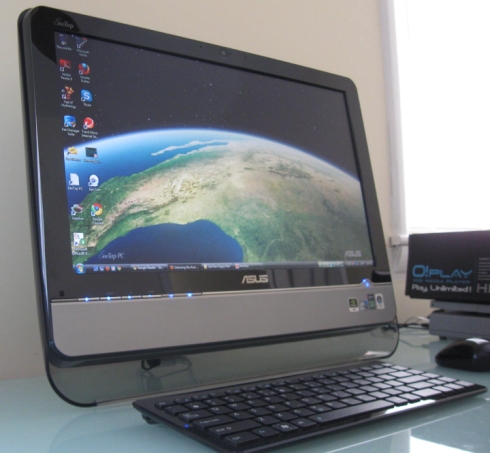 Bordering the edges of the display is a glossy black bezel. At the top is a 1 megapixel webcam and stereo microphones. 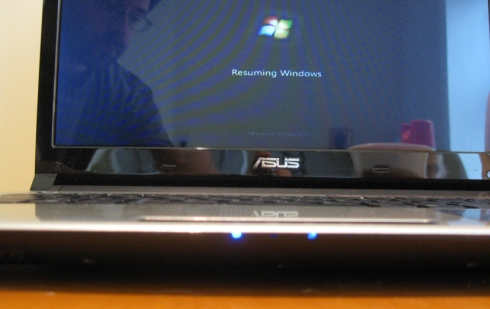 Toward the bottom you’ll find the power button on the right side and four buttons at the left including a Home button that will show your Windows desktop and three buttons for adjusting the display brightness, contrast, and other settings.

Below the buttons are the integrated stereo speakers. 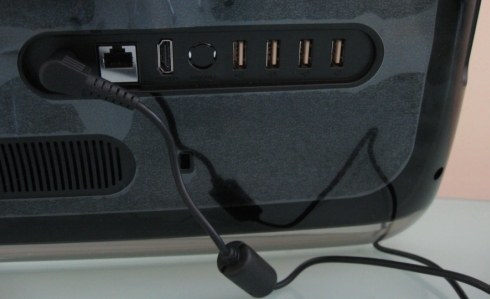 On the back you’ll find 4 USB ports, an Ethernet jack, an HDMI input (which allows you to use the Eee Top as a display for another device), and the power connector. The laptop also has built in 802.11b/g/n WiFi. 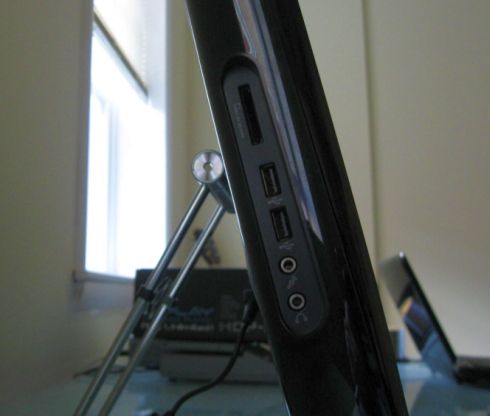 The right side of the ET2002 has a DVD drive on the right side, and that’s about it. The left side features 2 more USB ports, the headphone and microphone jacks, and a 3-in-1 flash card reader. 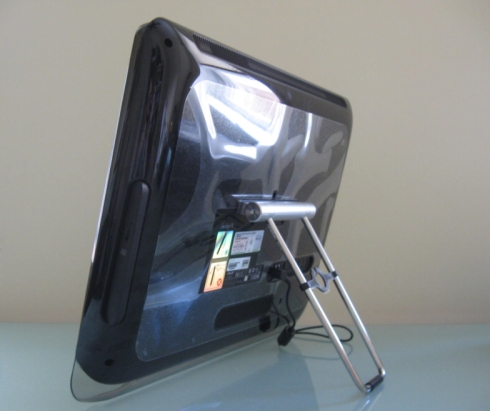 The Asus Eee Top ET2002 has three things that the earlier ET1602 didn’t: A dual core Atom 330 processor, NVIDIA ION graphics, and a higher resolution 1600 x 900 pixel display. The first two certainly help boost the computer’s performance in several areas, while the third item actually works against the computer by making the PC work a little harder in some cases. 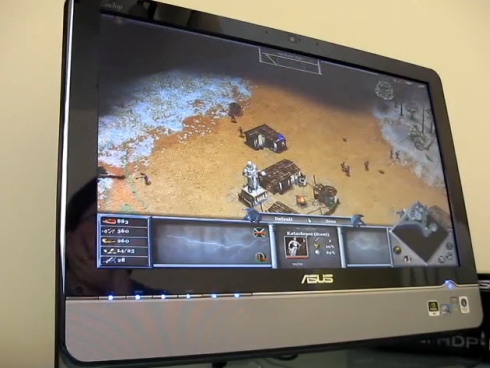 The NVIDIA ION graphics processor comes into play when you’re performing tasks like watching HD video or playing some video games. In those instances, the computer works flawlessly. I had no problems watching 1080p video downloaded from the Windows Media HD Showcase. I also had no trouble playing video games, although admittedly I don’t have any bleeding edge titles lying around the house. 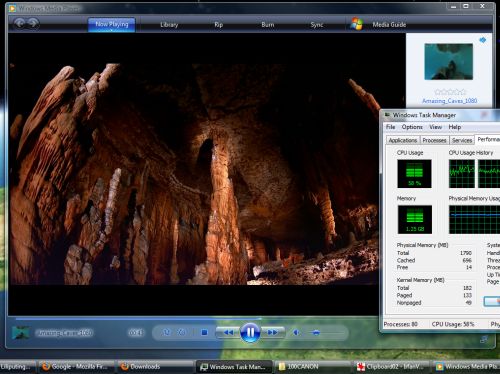 But for tasks where GPU acceleration doesn’t come into play, the ET2002 struggles a bit. For instance, HD Flash video playback is choppy. And if you try watching high quality (but not necessarily HD) Flash video from sites including YouTube and Hulu in fullscreen mode, don’t be surprised if you wind up looking at a slideshow instead of a video.

This should change later this year or early next year when Adobe releases Flash Player 10.1 which should take advantage of NVIDIA ION GPU acceleration. But for now, Flash relies on the Atom processor to do the heavy lifting, and even the dual core Atom 330 just isn’t up to the task. Interestingly, I had much better results when watching Silverlight HD video.

CPU-intensive tasks such as transcoding audio or video files will also take longer on this machine than on a computer with a more powerful processor. But there is at least one software application that leverages the powerful NVIDIA GeForce 9400 GPU to speed up video editing and transcoding jobs. If the NVIDIA ION platform catches on, we may see more applications take advantage of the GPU in the future.

I’ve also noticed that performing some basic tasks like scrolling news items in Google Reader, a rather Javascript-heavy web page feels noticeably slower on the ET2002 than on many netbooks or other Intel Atom powered machines with lower resolution displays. On the other hand, you do get a whole heck of a lot more screen real estate which makes it easy to run multiple applications side by side or view high resolution images. 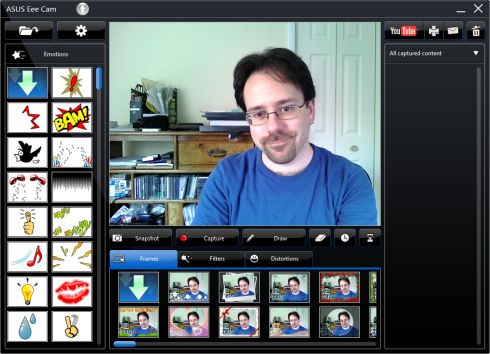 The computer has a 1 megapixel webcam, but it’s one of the best low end webcams I’ve used to date. It captures video quite smoothly, and because it’s placed substantially higher than the cameras on most netbooks, it’s much easier to take pictures, shoot videos, or position yourself for a web chat without that ominous camera-under-the-chin angle.

The Eee Top ET2002 ships with Windows Vista Home Premium and qualifies for the Asus Windows 7 Upgrade program. It also comes with a 60 day free trial version of Microsoft Office 2007 and an introductory subscription to Trend Micro Internet Security. 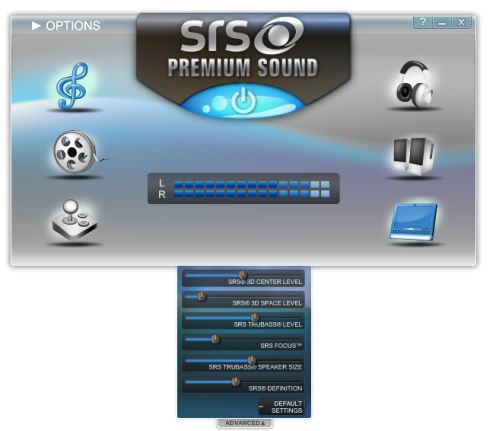 You also get the SRS Premium Sound software which gives you some advanced controls over the virtual surround sound speakers built into the front of the computer.

Asus also throws in a handful of its own software, including the Eee Bar which makes it easy to access the utilities when you scroll your mouse over the top of the screen. Asus has been loading the Eee Dock on its netbooks and all-in-one desktops for a while now and I’ve never really found it all that useful. But I suppose that’s because I don’t really have any problem finding my web browser and I don’t really use the Eee Memo or Eee Cam applications that come with the computer all that often. 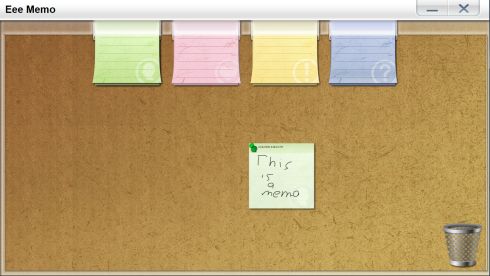 For some baffling reason, the Eee Bar includes a link to handwriting recognition software, which would certainly come in handy on the Asus Eee Top ET2002T which has a touchscreen display. But the Eee Top ET2002 does not.

There’s also an Eee Manager application which gives you quick access to a number of system settings including the list of programs that shows up in the Eee Bar, your network settings, and the Super Hybrid Engine, which lets you toggle  the clock speed of the Intel Atom 330 processor between “power saving,” “high performance,” and “super high performance.” 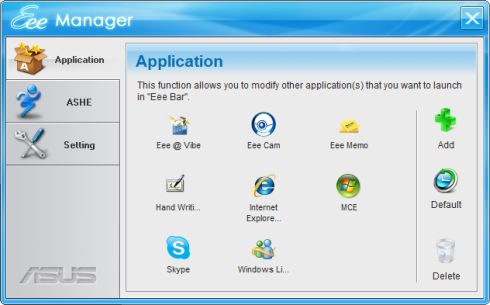 While the power saving mode definitely comes in handy on an Intel Atom powered netbook when you want to prolong your battery life, the Eee Top ET2002 doesn’t have a battery, so I don’t see any reason why you shouldn’t run the computer in high or super high performance modes all the time.

The computer comes with a wireless mouse and wireless keyboard. They’re incredibly easy to set up. Just pop open the battery compartments, insert 2 AAA batteries for each peripheral, and hit the connect buttons to link them to your Eee Top. That’s it. Asus even throws in 4 AAA batteries to get you started.

The keyboard has a chiclet/island design to it. Typing is reasonably comfortable, although I’m so used to hitting Fn+ the arrow keys to hit the Home, End, PgUp and PgDn buttons that I keep forgetting this keyboard has dedicated buttons for each of those functions. That’s human error though, not a design flaw.

The optical mouse has an on/off switch for saving power when you’re not using the computer, and includes a left and right button and a scroll wheel that you can click as a third button. It’s reasonably responsive, and actually works on my smoky glass table, where some of my other mice won’t.

The Asus Eee Top ET2002 is an impressive computer in many ways. It handles playback of local 1080p videos with ease, and it had no problem with video games that would have caused most Intel-Atom based PCs to choke. But while the NVIDIA ION graphics gives the laptop a major boost in some areas, in others the ET2002 behaves like a typical Intel Atom netbook. Unzipping large files takes a long time, Windows Vista takes 1-2 minutes to boot, and even some light weight tasks like flipping through web pages can feel slow at times. 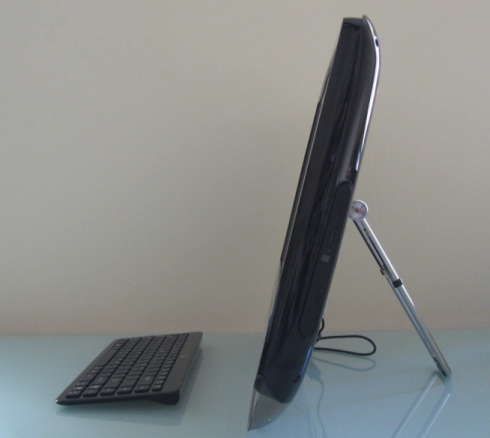 That said, the Eee Top ET2002 is positioned as a budget machine with high end multimedia capabilities. And it succeeds, both by offering excellent media playback features, but also in the budget arena: The computer has a starting price of $600, and you can currently pick one up from Amazon for just $581.