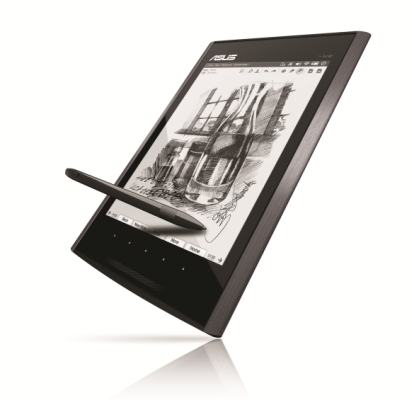 The other day we heard that the Asus Eee Tablet could hit the streets for “under $599.” If PC World is correct, we can put the emphasis on under, which is a good thing, because $599 would be a ridiculously high price for a device that’s basically an eBook reader — even an eReader on steroids.

PC World is reporting that the 8 inch touchscreen device could ship in October for about $300.

While the Asus Eee Pad series of tablets will run Windows 7, Windows Embedded Compact 7, and Google Android allowing you to run thousands of third party apps, enjoy media, and surf the web, the Eee Tablet is a different kind of device. It has a 8 inch, 1024 x 768 pixel touchscreen LCD display with support for 64 shades of gray.

It’s not backlit, which will save energy while providing a viewing experience similar to a dedicated eBook reader. Asus says the tablet will run for about 10 hours on a charge, which is pretty good until you compare it to a dedicated eBook Reader with an E Ink display — which can run for days on end without charging. E Ink displays also tend to have higher contrast ratios, looking more like paper than LCD screens.

But there are a few other things setting the Eee Tablet apart from machines like the Amazon Kindle or Barnes & Noble Nook. Because it uses an LCD display, you won’t have the same kind of slow screen refresh rate you see on E Ink devices. And the Eee Tablet will be designed for note-taking as well as reading, allowing you to jot notes, highlight passages, and perform other actions with a highly accurate stylus. The tablet will also have a web browser and WiFi capabilities.

The tablet will run a version of Linux developed by Asus. The company also may change the name to Eee Note before launch, to help make it more clear which of the upcoming Asus devices are meant as general consumer electronics devices and which are designed primarily for reading and note-taking. The Eee Tablet/Eee Note is aimed primarily at students.