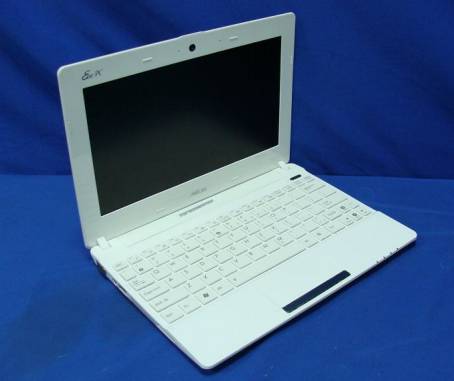 The Asus Eee PC X101 is a $200 netbook designed to use an 8GB solid state disk and run MeeGo Linux. Asus plans to launch the mini-laptop in the US later this summer. But the company is also working on a slightly different version called the Eee PC X101H which will have a higher capacity hard drive and Windows operating system. Last I’d heard Asus had no plans to offer that model in the US, but it showed up at the FCC web site today.

That doesn’t necessarily mean that Asus will be bringing this model to the States. Sometimes companies apply for FCC certification for devices just in case they might later want to launch those gadgets in the US.

Asus has posted a user manual and a number of photos to the FCC. There’s no information about the operating system or software, but the laptop clearly has a Windows key for launching the Start Menu.

The laptop has 2 USB ports, an SD card slot, an Ethernet jack, and a VGA port.

The photos also show a removable battery and RAM access panel, so users should be able to make some upgrades without opening up the case and voiding the warranty. Asus tells me that the Eee PC X101 will only be sold with a 3 cell battery in the US, but the X101 and X101H can also work with a 6 cell battery.

You might want to take the photos with a grain of salt though, since several show a model number of 900A. I suspect Asus just slapped an old sticker on this prototype, but the Asus Eee PC 900A is a netbook with an 8.9 inch display that was released in 2008.