The Asus Eee PC X101CH is probably one of the best new netbooks you can buy for $270 thanks to a Cedar Trail processor, fanless design, decent build quality and instant-on software. But the netbook has a few drawbacks for power users. For instance, it’s nearly impossible to upgrade the RAM. 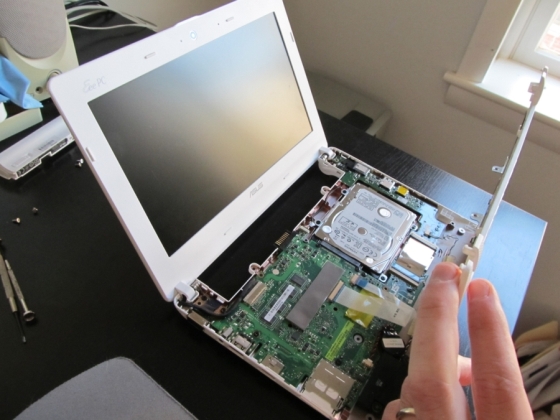 The Intel Atom N2600 processor used in the Eee PC X101CH supports up to 2GB of memory, but Asus only ships the netbook with 1GB of RAM… and it’s soldered to the motherboard.

You can’t simply add another stick of RAM to double the memory for two reasons:

Just to confirm the facts, I decided to open up the Eee PC X101CH and take a peek under the hood before shipping my review unit back to Asus.

In order to open the case you need to remove 11 screws and carefully pry apart the plastic keyboard area from the plastic on the base of the computer.

There are a number of plastic pieces designed to fit these two parts of the computer snugly together and if you’re not careful you could easily break something. In other words, don’t attempt this unless you’re cool with the possibility of destroying your $270 computer. In fact, you probably shouldn’t do this at all, because there’s not really much you can do once you open the case.

As promised, the 1GB of memory is affixed to the motherboard. You can’t upgrade it. 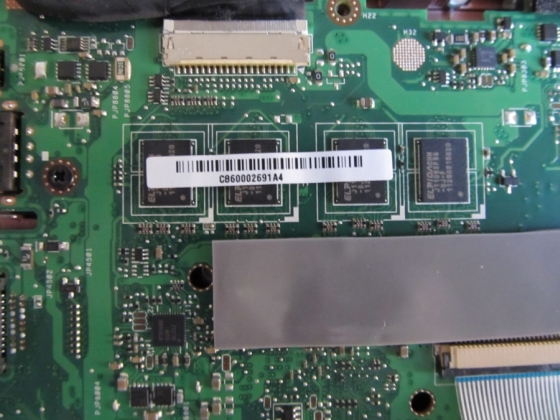 Theoretically you might be able to replace the hard drive, but a standard laptop hard drive probably won’t fit in the tiny Eee PC X101CH case.

I’d heard that the laptop used a hard drive that’s just 7mm thick rather than the standard 9.5mm hard drives found in most notebooks. I didn’t want to further risk damaging my review unit by taking out the hard drive and measuring it, but it certainly looks a bit thinner than most laptop hard drives I’ve seen.

It’s a standard SATA 3.0Gb/S hard 5400 rpm 320GB hard drive though, so if you can find another hard drive or solid state disk that will fit in the case, I suppose you may be able to upgrade the storage.

That would also probably make the netbook run more quietly. Since there are no fans making whirring noises, the only noise I heard from the Eee PC X101CH came from the moving parts in the hard drive. A solid state disk has no moving parts, so not only would you probably get a performance boost by switching to an SSD, but you’d also eliminate the sole source of noise.