The Asus Eee PC X101 hasn’t gone on sale in the US yet, but it’s expected to hit the streets in September. Meanwhile, the folks at Vietnamese site Tinhte.vn have already managed to get their hands on the mini-laptop. The Eee PC X101 is one of the first netbooks from a major computer company to ship with MeeGo Linux instead of Windows. But that’s only one of the things that makes it special — it’s also expected to sell for under $200 in the US (or about 169 Euros in Europe). 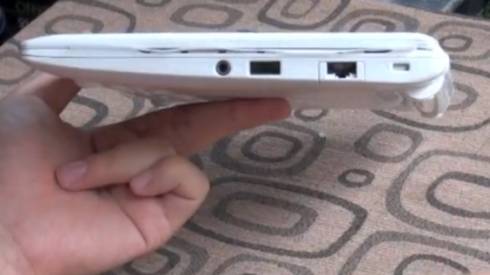 In the unboxing video, you can see that the Vietnamese version will come with several different power adapters. I suspect US customers will get just one. The reviewer also shows off the tablet’s thin sides (it measures less than an thick), 2 USB ports, Ethernet jack, and VGA port.

The Eee PC X101 has an 8GB solid state disk instead of a hard drive and runs MeeGo Linux. It also uses a 1.33 GHz Intel Atom N435 processor, which is one of the least expensive (and least powerful) Intel Atom chips available. Those decisions were made to keep the laptop’s price low. Asus will also offer an X101H model for a higher price. That version will be available with a 250GB hard drive and Windows 7. In fact, it looks like this video may actually show the Eee PC X101H, since the laptop has VGA and Ethernet jacks — which are both expected to be absent on the cheaper X101 model. It looks like Asus will offer X101H customers a choice of MeeGo or Windows.

MeeGo is an operating system optimized for netbooks, tablets, and in-vehicle entertainment systems. The user interface feels like a cross between a desktop OS such as Windows and a mobile OS such as Android. Most apps, for instance, run in full screen mode instead of in smaller windows.

There’s no start menu or taskbar, per se, but there are a series of tabs at the top of the screen that you can use to switch between different parts of the operating system. One window shows a list of installed apps, while another shows system settings. A third area shows networking settings, and a fourth shows updates from your social networking sites.

While the unboxing video is in Vietnamese, it’s worth watching with the sound off if you want an overview of how the first MeeGo Linux netbook from Asus will work.