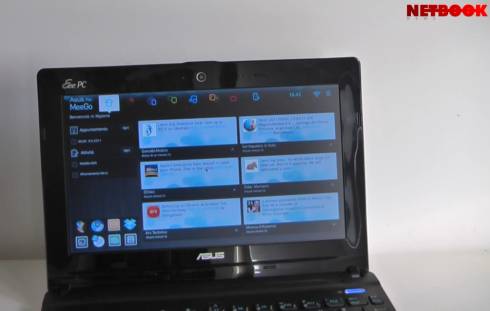 Asus hasn’t started shipping the Eee PC X101 netbook in the US yet, but our friends at Eee PC.it in Italy got their hands on one the $200 mini-notebook powered by a 1.33 GHz Intel Atom N435 processor and MeeGo Linux operating system. They’ve posted a detailed reivew, along with a few videos that include English subtitles.

Here’s the short version: The hardware is pretty much what you’d expect from a cheap netbook, with a somewhat cramped keyboard, a 3 cell battery that’s good for a little under four hours of run time, and a matte display. The unit featured in the review also provides easy access to the RAM, solid state disk, and other internal components which should make the netbook easy to upgrade. It’s possible some models might not include an access panel.

But the reviewer was underwhelmed by the MeeGo Linux experience. While the computer was reasonably responsive, has a decent web browser, and can run OpenOffice.org software, but the app store doesn’t offer much in the way of third party applications.

Of course, it’s possible that once we start to see more MeeGo netbooks hit the streets developers will add applications to the Intel AppUp Center (which is what the Asus app store is based on). On the other hand, there’s nothing preventing you from picking up a cheap Eee PC X101 and installing your own favorite operating system on it. Ubuntu Linux is a popular choice among netbook users, and folks have been installing versions of Ubuntu on Asus netbooks since the first Eee PC was launched way back in 2007.