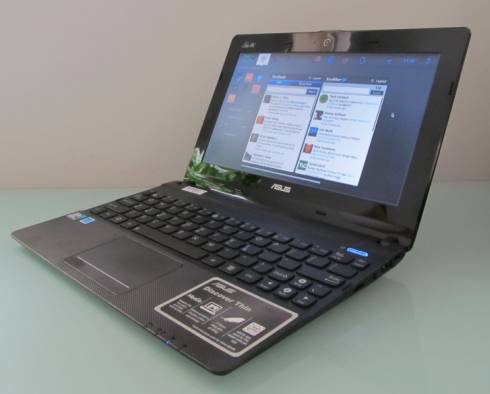 The Asus Eee PC X101 is the thinnest, lightest, and cheapest member of the Eee PC netbook family. The mini-laptop weighs just two pounds, measures less than 0.7 inches thick, and sells for about $200

In order to build a netbook that’s both small and inexpensive, Asus made some interesting design choices. The Eee PC X101 ships with 8GB of flash memory instead of a larger hard drive. This sort of storage isn’t just cheaper. It also generates less heat, which is important in a thin laptop that doesn’t offer a lot of space for ventilation.

The Eee PC X101 is also one of the first computers to ship with a new low power 1.33 GHz Intel Atom N435 processor. It’s a little slower (and cheaper) than the Atom chips found in most netbooks today with model numbers starting at N455 and going up from there (including the N475, N550, and N570).

Asus sent me a demo unit to review. While I’m impressed with the size and weight, I’m a little underwhelmed by a few other items. The keyboard is small and cramped — something I thought Asus had outgrown years ago. The touchpad is difficult to use, not only because the left and right buttons are built into the touch surface, but also because clicks don’t always register. And the computer feels kind of slow at times — although it boots very quickly, in just about 20 to 25 seconds.

The good news is that the Eee PC X101 appears to be very hacker friendly. There’s an access panel on the bottom that you can open up by removing a single screw. This lets you upgrade or replace the RAM and the solid state disk.

The MeeGo operating system feels limiting, but if you’re comfortable with Linux there’s a terminal app built-in, which you can use to customize the operating system, add applications, or make other changes without using the Intel AppUp Center app store and default configuration options.

If you’re not familiar with Linux, the OS is still designed to be user-friendly, but not very Windows-like. It might be best to think of the MeeGo experience as a browser-based operating system like Chrome OS or even Joli OS, where the web browser and web apps are the most important elements. But you can also connect to your social networks, instant messaging, and email services and receive notifications directly on your desktop.

Since the Eee PC X101 has an x86 processor, it should also be capable of running any number of alternate operating systems if you’re not in love with MeeGo. We’ve already seen this laptop tested with Ubuntu, Chromium OS, and Windows 7.

I’ll have more details once I’ve spent a little more time with the Eee PC X101. For now, enjoy some more photos: