The Asus Eee PC 701 was the first netbook to hit the streets back in late 2007. At this point, it’s looking a little dated, but at the time it was the only game in town if you wanted a tiny laptop with a 7 inch display for under $400.

It shipped with a 900 MHz Intel Celeron processor underclocked to run at 633 MHz, 512MB of RAM, and 2GB to 4GB of flash storage. While it’s easy to upgrade the RAM or storage, the CPU is soldered into the motherboard — but that hasn’t stopped one guy from pulling it out and slapping in a faster chip. 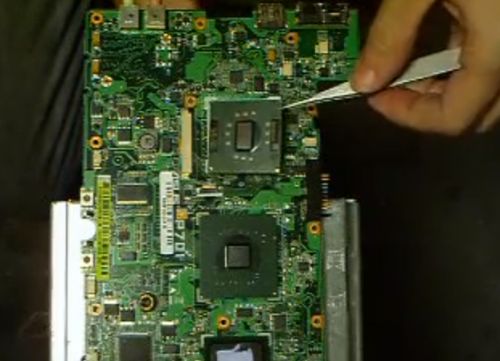 YouTube user RedFathom pointed a hot air gun at the bottom of the motherboard to loosen the original chip, pull it off, and replace it with a new processor.

The replacement chip  is a 1.6 GHz Intel Pentium M LV 778. It’s not exactly a speed demon, but it’s significantly faster than the processor that came with the Eee PC 701.

For the most part, laptop processors aren’t meant to be upgraded and using a hot air gun like this could cause some serious damage. I wouldn’t recommend trying this at home.

But it’s nice to see someone breathing new life into the first netbook.

The first video below shows the process of swapping out chips. It’s a bit long, but you can see the first chip come out at around 6:30. The second video shows the motherboard successfully booting Xandros Linux after the new processor is installed.