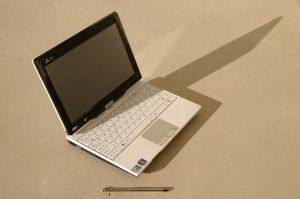 The other day Kubel at MyT91.info posted some photos and first impressions of the new Eee PC T91MT touchscreen netbook. Now that he’s had a few days to play with it, he’s posted a detailed review.

This model features an 8.9 inch multitouch display, a 32GB solid state disk, and a 1.33GHz Intel atom Z520 processor. It runs Windows 7 Home Premium. Kubel impressed with the build quality, which he says is pretty much the same as for the Eee PC T91 that was released a few months ago with Windows XP and a single-input touchscreen.

In addition to having a multitouch display, Kubel notest hat the screen looks better when viewed from an angle than the earlier model. He says it’s also less glossy than the original display.

On the down side, it appears that the multitouch screen is really a 2-touch screen. It recognizes up to 2 inputs, but no more. So don’t expect any applications designed to let you play piano or perform other activities requiring up to 10 fingers at once.

Kubel was also underwhelmed by the 1.33GHz Intel Atom Z520 processor and GMA 500 graphics, which generally don’t feel as responsive as the faster 1.6GHz Intel Atom N270/GMA 950 chipset found in most netbooks.

For more details, make sure to check out Kubel’s extensive review.