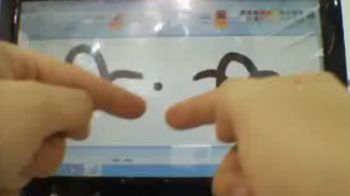 Asus is showing off the Eee PC T91 with a convertible touchscreen tablet design at Computex. No surprise there. The company’s been demonstrating this netbook at trade shows since CES in January. But here’s a bit of news: It looks like the netbook may include a capacitive screen capable of registering more than one touch at a time.

Johannes from Eee-PC.de says all of the T91 units on display at Computex running Windows 7 were able to recognize multitouch, and he’s shared the video below which shows a multitouch T91 in action.

According to the booth representative, when the Eee PC T91 ships, it will include this new multitouch display. I checked with my contact with Asus USA and he says the company has no comments regarding multitouch capabilities. That doesn’t mean it’s not happening… but let’s call this an unconfirmed report for now.  A rather cool and exciting unconfirmed report with a high level of plausibility.

Update: Jkkmobile followed up on Johannes’s tip with another video. He says the multitouch screen will only be available on the Windows 7 version of the Eee PC T91, which makes sense, since Windows XP doesn’t support multitouch features out of the box. You can see the new video after the break.