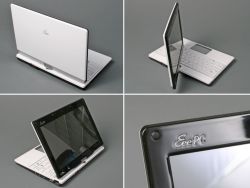 The Asus Eee PC T91 won’t hit the streets for at least another month or two. But the folks at Bit-Tech got to spend enought ime with a pre-release model to post an early look article that reads almost like a review. It’s worth keeping in mind that they were playing with a pre-release build and Asus may change some components of this computer before letting it loose on the public.

Bit-Tech found the keyboard to be on the smaller side, which isn’t surprising given the small size of the laptop. It measures just about 8.5″ x 6.5″ x 1.1″ and weighs just about 2.2 pounds. Asus also plans to release a model with a 10 inch screen (the T91 has a 9 inch touchscreen display), but the larger Asus Eee PC T101H doesn’t seem to be making the press rounds as quickly as the T91.

The glossy touchscreen and the shiny bezel around the screen are prone to attracting fingerprints, which is unusual for an Asus netbook. As expected, the convertible tablet will come with an optional 3G modem, GPS receiver, and/or DVB-T television tuner. Asus says that while the battery is not removable, the computer should run for up to 5 hours on a charge, thanks to the use of the low powered Intel Atom Z520 CPU.

Like the CTL 2Go PC and other Classmate PC 3-based computers, the Eee PC T91 will run Windows XP Home instead of the more expensive Windows XP Tablet Edition. But Asus has designed a suite of applications that make the computer easier to navigate with a stylus or fingertip.