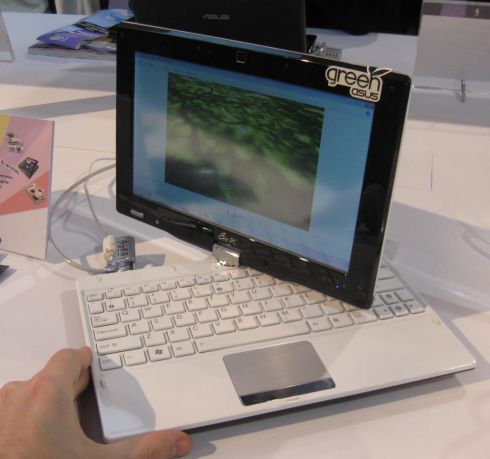 Asus plans to launch its 10 inch tablet-style netbook this year. No, really. Sure, the company first showed off the Eee PC T101 at CES last January. But the device has undergone a bit of minor surgery over the past year, and the new version actually looks pretty slick.

Under the hood, the Eee PC T101MT has a 1.6GHz Intel Atom N450 Pine Trail processor, and it can run Windows 7 Starter or Home Premium. The Starter version will come with 1GB of RAM, and a 160GB hard drive, while the higher end model will pack a 320GB HDD and 2GB of RAM. You also get 802.11b/g/n WiFi, Bluetooth, and a 35Whr battery that Asus says is good for up to 6.5 hours of run time.

The touchscreen has been bumped up to a capacitative  multitouch display. It’s similar to the screen on the smaller Eee PC T91MT which is already available. But you know, bigger. But I think the two factors that really make the T101MT more attractive than the T91MT are the larger keyboard and the use of the Atom N450 CPU instead of the sluggish Atom Z520 found in the smaller model.

You know the drill by now. More photos after the break.