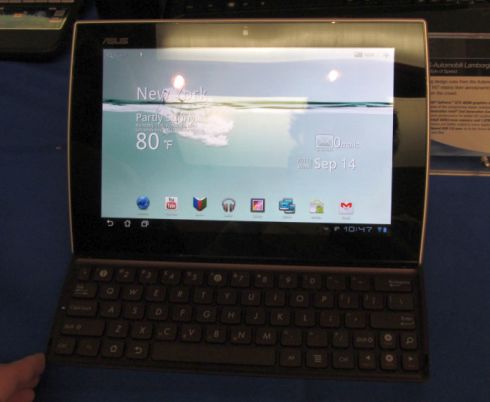 The Asus Eee Pad Slider is a 10 inch Android tablet with a built-in keyboard. It hides away behind the display when you’re not using it, and when you want to do some serious typing, you just pull out the keyboard for a little QWERTY action.

Asus first unveiled the tablet at the Consumer Electronics Show in January, but the company has taken its time bringing the Slider to market. Now it’s finally expected to ship in the US soon… by the end of September, in fact. A few days ago pre-order pages even started popping up, although a few of those have been pulled down since then.

I got a chance to spend some time with the Slider last night, and it seems like Asus did a great job of working out some of the kinks that were evident earlier this year. The sliding mechanism seems very solid, which is good, because I suspect some users may pull out that keyboard thousands of times over the life of the tablet — and at least a few dozen times when they first take the tablet out of the box and marvel at the design.

The keyboard itself is nothing all that special. The keys are kind of cramped and there’s no trackpad of any sort. I could definitely touch type on the keyboard, but because the keys aren’t as large as those on a typical notebook, or even those on most 10 inch netbooks, expect to make a few typing errors while you get used to the keyboard.

The thing that surprised me the most about the Slider is just how well it seems to work without the keyboard. The tablet is a little heavier than most 10 inch Android tablets thanks to the keyboard, but weighing in at about two pounds it’s not that much heavier than the Motorola XOOM or Toshiba Thrive, which are around 1.6 to 1.7 pounds. The Slider is pretty well balanced and feels pretty good whether you’re holding it in one hand or two.

Aside from the keyboard, the Slider is a pretty typical tablet with a 1 GHz NVIDIA Tegra 2 dual core processor, a 1280 x 800 pixel Gorilla Glass IPS display, and Google Android 3.2 Honeycomb. It’s expected to run around $479 and up when it hits stores in late September.