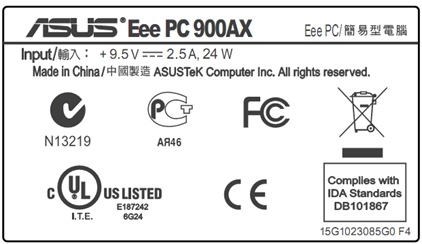 A mysterious netbook called the Asus Eee PC 900AX popped up at the FCC web site this week. There’s not much information available at the moment, but we can guess a few things:

And really that’s about it. Asus offers a few models in Europe with X in the name, including the Eee PC 1001PX and Eee PC 1005PX, and these models ship with Windows XP. But the Eee PC 900 always shipped with Windows XP because it was launched before Windows 7 was available. So I’m not really sure what the X stands for here.

My contact at Asus says he’s not aware of any new 9 inch models destined for the US. This could be another model that will be only available in Europe or Asia, despite the fact that Asus took the step of submitting documents to the US Federal Communications Commission for approval.

In related news, Ricardo at Eee PC.it dug up two more new model names last night: The Eee PC 1201K and Eee PC 1201X. Both of these appeared in a document from Asus, but there’s even less information about these notebooks than there is about the Eee PC 900AX.