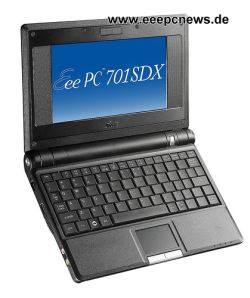 Eee PC News.de has snagged some images of an upcoming Eee PC that may be the $307 netbook Asus CEO Jerry Shen hinted at a few days ago.

Aside from the fact that it will be called the Eee PC 701SDX and look a lot like the Eee PC 701, there’s not much known about this model yet. It appears to have a 7 inch display, a large bezel around the screen, and no webcam. So it certainly seems like this could be a cheap new Eee PC model.

Wait, no… it’s actually exactly a year too late for that. It was on October 16th, 2007 that Asus released the first Eee PC. The Eee PC 701 launched the netbook revolution. The OLPC project howed that it was possible to make ultraportable laptops that didn’t cost an arm and a leg if you didn’t need to run Crysis on them. And Asus showed that you could actually sell these netbooks to consumers.

A lot can happen in a year. Now practically every major notebook manufacturer with the exception of Apple and Sony have announced or released a netbook, loosely defined as 10 inch or smaller notebook with a price tag of $600 or less (usually closer to $400 or $500). And Asus has gone to town, releasing well over a dozen different Eee PC models, as well as the Eee Box mini-dekstop, and the Eee Top all-in-one PC/iMac clone. Asus even plans to release an Eee-branded motherboard and to push an LCD TV with the Eee PC name as well as the custom Linux interface Asus designed for some of the company’s netbooks.

While Asus and the netbook market in general have come a long way in a year, there are two trends that have been particularly notable. First, the prices of entry level models have continued to drop. And second, we’re seeing low cost netbooks with more powerful spec.

A year ago, $400 was about as good a price as you could find for a cheap subnotebook. And you’d take your seven inch screen and 900MHz Intel Celeron processor and be happy with it. Today, you can get a machine with a 1.6GHz Intel Atom CPU, 8.9 inch display, and 6-cell battery

for that price. For about $50 more

, you can find another netbook that adds Bluetooth, 802.11n WiFi, and a mult-touch trackpad.

So while I would have been excited to see the Asus Eee PC 701SDX sell for $300 in October, 2007, this year all I can do is shrug and wonder if there’s something marvelous hidden behind that big bezel around the screen that will help set the 701SDX apart from existing cheap Eee PC models like the 2G and 4G Surf.