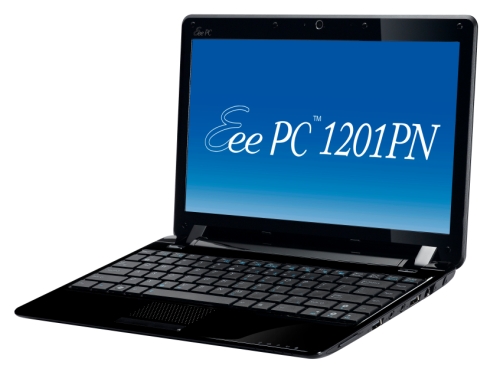 Asus is expected to launch a new 12.1 inch notebook with an Intel Atom processor and NVIDIA ION graphics next month. It’s called the Eee PC 1201PN and it will be one of the first machines with NVIDIA’s next-generation ION graphics and a 1.66GHz Intel Atom N450 processor. But if you were holding out for a dual core version, it looks like you might not have to wait that long. Notebook Italia reports that Asus will launch another model called the Eee PC 1215N in June, with a dual core Intel Atom N500 processor and NVIDIA ION graphics.

There’s not a lot of information available about the 1215N at this point. But it will reportedly support NVIDIA Optimus technology which allows the computer to automatically switch between the NVIDIA high performance graphics card and the integrated Intel GMA 3150 graphics depending on what programs you’re running. This helps prolong battery life while giving you a performance boost when you need it.

French site Blogee reports that NVIDIA Optimus technology will not be available in the Eee PC 1201PN with its single-core Atom chip, despite earlier reports suggesting it would.

Update: Hardware Zone reports that the Eee PC 1201PN will be available with several different single and dual core Atom chips… but that the reason it won’t support Optimus is that Asus wants to have one of the first next-gen ION notebooks on the market. It’s not clear if that means Optimus isn’t ready for prime time yet, or if there just hasn’t been time to implement it properly.