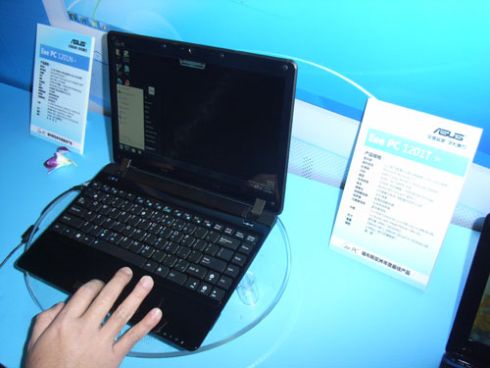 Asus will apparently be launching three different versions of the upcoming Eee PC 1201 12.1 inch notebook. We already knew about the Eee PC 1201N, which would feature an Intel Atom processor and NVIDIA ION graphics and the Eee PC 1201HA which will have an Atom Z520 processor and GMA 500 graphics. But now it looks like there will also be an Eee PC 1201T model that will use a completely different chipset.

Asus introduced the notebook at an event in China. The Asus Eee PC 1201T will feature a dual core 1.6GHz AMD Neo MV40 processor and ATI RAdeon HD3200 graphics. That’s the same chipset used in the upcoming MSI Wind X230 as well as several other thin and light laptops expected to launch within the next few months.

In other words, odds are that the Eee PC 1201T will have crappy battery life by netbook standards, but it should offer noticeably better CPU and graphics performance, especially when it comes to playing 3D accelerated video games.