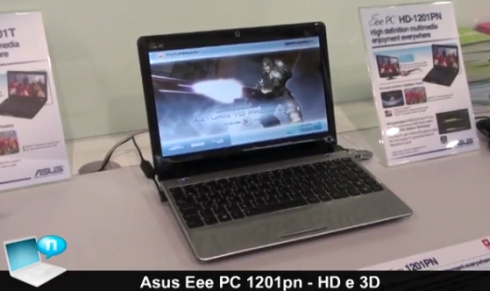 So is the next-generation NVIDIA ION platform faster, slower, or about the same as the ION chipset found in notebooks such as the Samsung N510, Lenovo IdeaPad S12 and HP Mini 311? An early benchmark suggested it wasn’t quite up to snuff. But it turns out that test was performed on a pre-release netbook with the less powerful of NVIDIA’s 2 next-gen ION chips.

Now that NVIDIA has officially launched the platform and a number of new ION-powered devices are on display at CeBIT in Germany, the folks at Notebook Italia have had a chance to run a benchmark on the Asus Eee PC 1201PN. This machine features the new 16-core version of the next-generation ION chip.

And lo and behold, it did score better in the 3DMark06 benchmark than the Eee PC 1201N, a similar notebook with first-generation ION graphics. When I ran the benchmark on an Eee PC 1201N, I got a score of 1559. Notebook Italia reports that the Eee PC 1201PN scored 2013 on the same test.

The Eee PC 1201PN probably isn’t going to take on the Alienware M11x gaming ultraportable anytime soon. But it’s definitely a step above earlier ION-powered machines in the graphics department.

You can check out a video showing the Eee PC 1201PN in action after the break.

Update: Netbook News.de has the benchmark results using 3DMark03. The score? 4482. That’s noticably higher than the 3049 notched by the Acer Aspire One 532g with the less poweful version of next-gen ION.