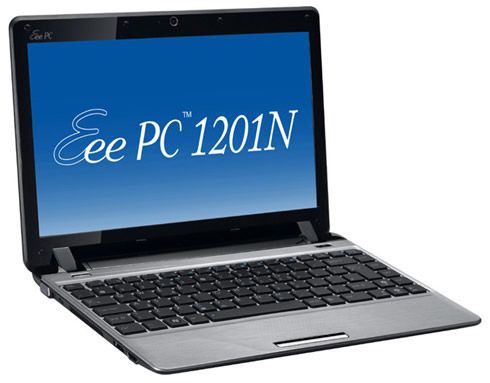 The Asus Eee PC 1201N is the first 12.1 inch laptop to hit the streets with NVIDIA ION graphics and a dual core Atom 330 CPU, which is more typically found in desktop computers. The combination means two things:

The dual core Atom processor is designed to provide a boost when it comes to multitasking or running applications that can take advantage of multiple cores. But for many activities, a dual core processor isn’t going to make a huge difference, and the truth is a dual core Atom CPU isn’t anywhere near as fast as a dual core Intel CULV processor. But the NVIDIA ION graphics are much more powerful than the GMA 4500MHD graphics found in most CULV systems, so you should have a better experience playing games, watching HD video, or running CUDA-enabled software.

It’s going to be at least a few more days until my review unit shows up, but Asus did send out its first batch of demo models recently, and I’ve spotted at least four reviews so far. Here’s a brief summary:

Probably the most telling line comes from Notebook Review, which suggests that the Eee PC 1201N “was designed to fit a market segment that didn’t really need to be filled.” It has better graphics than most CULV-based notebooks, but not the processing power. It has a faster processor than most netbooks, but not the same kind of battery life. And of course, at about $499, it’s about the same price as a low end CULV notebook such as the Acer Aspire 1410.

I’m going to try to reserve final judgement until I’ve had a chance to test an Asus Eee PC 1201N for myself. But it sounds to me like this might be the best computer on the market if you’re looking for a low end, light weight, portable gaming rig and battery life isn’t your top priority. But if you plan to use your computer for almost anything other than gaming, you might be better off with a CULV-based machine.