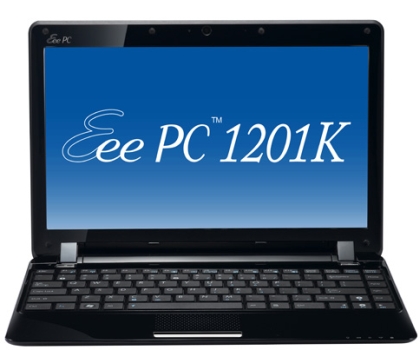 The Asus Eee PC 1201K is a 12 inch thin and light laptop with a 1366 x 768 pixel display, and a case design similar to the Eee PC 1201N, 1201T, UL20A, and other 12 inch mini-laptops from Asus. We already saw the notebook mentioned in an Asus Eee PC 1201-series user manual last month, but at the time there wasn’t much information telling us how the 1201K differed from its brethren. Now we may have an answer. It appears the new model has an AMD Geode processor, something you don’t find in modern laptops very often.

The folks at Eee PC.it spotted an official product page for the Eee PC 1201K. The stand-out feature is the laptop’s 1.4GHz AMD Geode NX1750 processor and SIS741CX/964 chipset.

Most other Eee PC 1201 models come with Intel Atom processors, although the Eee PC 1201T has a newer AMD Neo chip.

AMD first launched its line of Geode processors in 2003. The chips are designed for low power consumption, and the original OLPC XO Laptop used a Geode chip.

The AMD Geode NX1750 has a total power draw of 14 watts, and while there’s no word on pricing, I’m guessing it will help keep the cost of the Eee PC 1201K low, especially when compared with similar models from Asus that sport Intel Atom chips and NVIDIA ION graphics.

We already learned from the user manual that the Eee PC 1201K has no access panel on the base of the computer, two USB ports, and a VGA port, but no HDMI output.

You can find detailed specs for the Eee PC 1201K after the break.