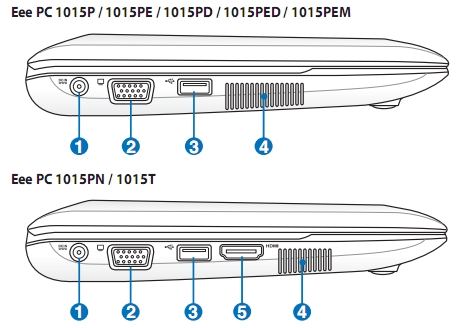 There’s still no word on when Asus will start shipping the Eee PC 1015T netbook it introduced in June, or whether it will make it to US shores. But the company has uploaded user manuals to its support site in 29 different languages, so that’s a pretty good indication that something is going on, right?

From the user manual, it seems pretty clear that the netbook has a chassis very similar to the one used for the Eee PC 1015PED and 1015PEM, although like the upcoming Eee PC 1015PN (with NVIDIA ION graphics), this model will have an HDMI port.

Like other Asus netbooks, it looks like the Eee PC 1015T will have a multitouch trackpad and ship with some Asus software including the Super Hybrid Engine for overclocking and underclocking the CPU.

As an added bonus, I learned that the Eee PC 1015PN with NVIDIA ION graphics will only support NVIDIA Optimus technology if you’re using Windows 7 Home Premium or higher. Optimus automatically switches between the integrated Intel graphics and the dedicated NVIDIA graphics depending on what you’re doing with the computer. Theoretically this helps prolong battery life without affecting performance in any significant way. Unfortunately if you’re using Windows 7 Starter Edition, it looks like you’ll manually have to switch the ION graphics on and off.