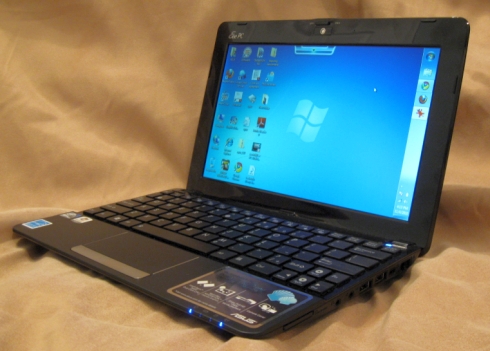 The Asus Eee PC 1015PN may be one of the most powerful 10 inch netbooks with an Intel Atom chip on the market today. Unfortunately with great power comes less than stellar battery life. While the Eee PC 1015PN can handle 1080p HD video playback and some 3D graphics and gaming tasks, those capabilities come at the expensive of battery life, and you’ll be lucky to get between 4 and 6 hours of run time depending on how you use the laptop.

The netbook has a 1.5GHz Intel Atom N550 dual core processor and next-generation NVIDIA ION graphics. On paper it sound awesome. And in reality, it’s pretty good. But it’s not perfect.

For instance, while the netbook can handle HD graphics, it has a typical 1024 x 600 pixel netbook display, which means that you won’t really be able to see the difference between HD and standard definition video unless you plug in an external display. The Eee PC 1015PN also ships with Windows 7 Starter Edition, which doesn’t support NVIDIA Optimus graphics switching. That means if you want to switch between using the ION graphics (for higher performance) and the integrated Intel graphics (for better battery life), you’ll need to reboot the computer.

I’m not going to spend a lot of time talking about the design, keyboard and touchpad on this model. The Eee PC 1015PN is nearly identical to the Eee PC 1015PED I reviewed a few weeks ago in these areas — and pretty similar to every Eee PC netbook the company has released in the last year or two. 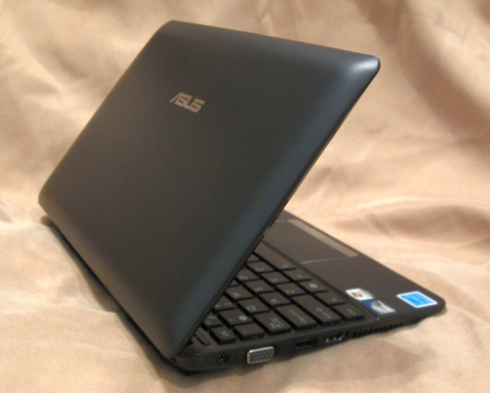 If you’ve been following the Eee PC space closely, here are the two things you might want to know before you skip down to the performance section:

The computer has the usual array of ports, including 3 USB ports, an Ethernet jack, VGA port, headphone and mic jacks and an SD card slot. 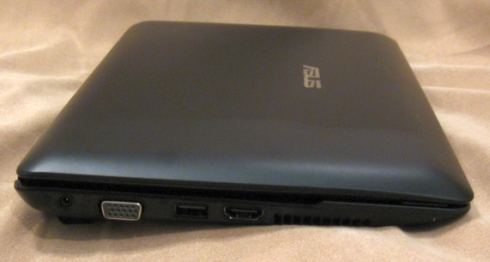 On the bottom there’s a single access panel for upgrading the RAM. You’ll need to take the computer apart to change the hard drive or other internal components. 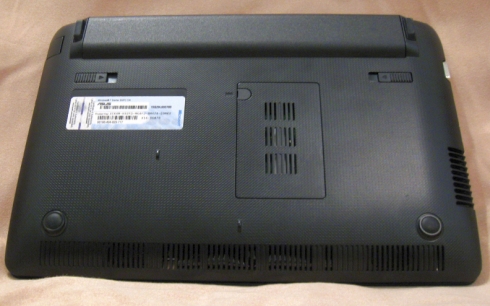 The lid has a matte finish and comes in several colors. The demo unit Asus sent me is black, as is the palm rest and keyboard area. 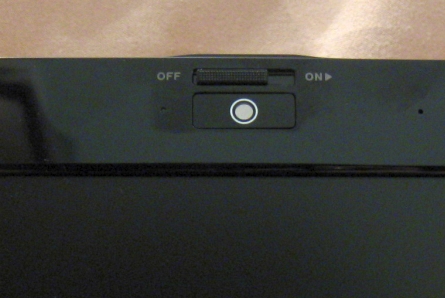 The webcam is located at the top of the screen bezel, and there’s a physical switch you can slide to open or close a door over the camera to protect the lens — or your privacy — when you’re not using it 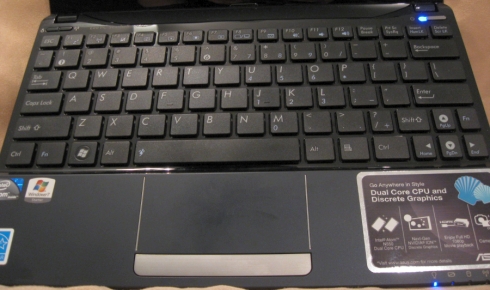 The keyboard features an island-style layout, with flat keys separated by small gaps. The shift key on the right side of the keybaord is rather small but it makes room for arrow keys and an extra Fn key on the right. 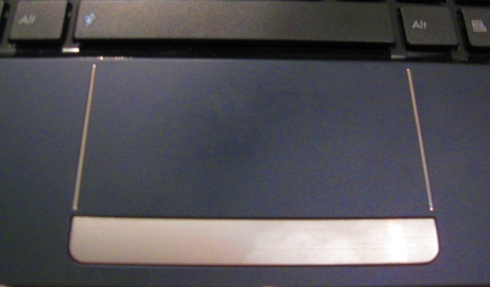 The touchpad has the same texture and finish as the palm rest, and is bordered by little strips of chrome, making it easy to find the edges without looking down at your fingers. There’s a single large button beneath the touchpad, with a rocker in the middle allowing you to register left and right clicks.

There are two key hardware differences between the Eee PC 1015PN and every other netbook Asus has ever released:

I ran a series of benchmarks on the Eee PC 1015PN to see how it handled CPU-intensive tasks such as transcoding audio and video files and creating a ZIP archive file from a large group of files. 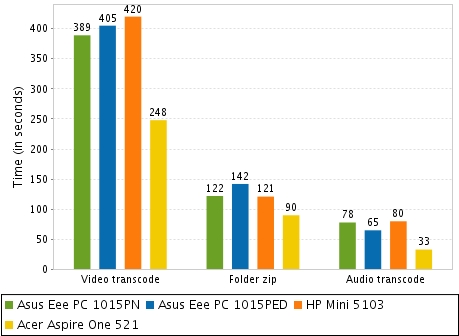 But the Acer Aspire One 521 with a 1.7GHz AMD Neo K125 processor came out ahead in every single test. In fact, it was more than twice as fast as the Eee PC 1015PN in the audio transcoding test.

In order to test the graphics performance, I ran two different benchmarks: 3DMark06 and the Street Fighter IV benchmark.

It’s worth pointing out that NVIDIA produces two different versions of its latest ION graphics chip for low power computers. The first is designed for laptops with 11.6 inch or larger displays and/or nettop (tiny desktop) computers. This version offers almost twice the performance of the first generation NVIDIA ION chip.

That’s not the version the Eee PC 1015PN has. Instead, it uses the version of ION designed specifically for 10 inch and smaller netbooks. It uses less energy and generates less heat — and it’s maybe a tiny bit faster than the first generation ION chips. The Eee PC 1015PN came out a little ahead of the HP Mini 311, Lenovo IdeaPad S12, and ASRock ION 330 in the 3DMark06 test… but a little behind the Eee PC 1201N.

By comparison, the Lenovo IdeaCentre Q150 nettop has the more powerful version of NVIDIA’s new ION chip, and as you can see from the chart above, it squashes the competition. The Acer Aspire 521, meanwhile, seems to hold its own against the Eee PC 1015PN. The Acer laptop has ATI Radeon HD 4225 integrated graphics.

The Eee PC 1015PN bested the Acer laptop in the Street Fighter IV benchmark, but it still eked out fewer than 17 frames per second in the test — which means the game is all-but unplayable unless you adjust the graphics settings to the point where the characters look like 2D cartoons and you might was well be playing Street Fighter I. The Lenovo Q150 is one of the first computers with an Atom processor that I’ve seen pass the Street Fighter test… which shows how much difference there is between the two versions of NVIDIA’s new ION graphics solution. 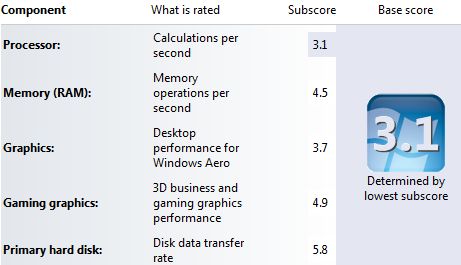 The Eee PC 1015PN does get a higher Windows Experience Index score than most netbooks, but that 3.1 score out of 7 is still pretty low, and as you’d expect, it’s the low power CPU that’s the weakest link.

OK… so the Eee PC 1015PN isn’t going to replace a high end gaming rig. I don’t think anyone really expected a $430 netbook to do that. Netbooks are generally small, cheap, and portable. What the Eee PC 1015PN offers is a little more power than you’d get from a typical netbook, allowing you to do things such as:

You probably won’t be surprised to find out that enabling the NVIDIA ION graphics on the Eee PC 1015PN will take a toll on battery life. In fact, with ION graphics turned on, I only managed to get about 4 hours and 6 minutes of run time out of the laptop — and that was without really using the netbook to watch HD video or perform other graphics-intensive tasks. For most of those 4 hours I was just streaming music over the web from Pandora.

Things get better when you switch to the integrated Intel GMA 3150 graphics. I was able to stream music from Pandora while doing some light web browsing for 5 hours and 37 minutes before the battery died.

While 5 and a half hours of run time isn’t bad, it’s not even close to the kind of battery life I’ve come to expect from Asus netbooks over the past year. The Eee PC 1005PE, for instance, lasted about 10 hours during my battery test, while the Eee PC 1001P ran for over 8 hours.

Battery life will also probably vary depending on whether WiFi and Bluetooth are enabled. And you can improve battery life by using the Asus Super Hybrid Engine to underclock the CPU by enabling “Power Saving Mode,” although in my tests the computer felt much slower when surfing the web with 5 or 6 browser tabs open in this mode — something that I hadn’t really noticed when using the Super Hybrid Engine on other Asus netbooks.

I’m not sure if it’s the Intel Atom N550 processor of the NVIDIA ION graphics that makes the difference, but I’d recommend leaving the computer in “High Performance” or “Super High Performance” mode most of the time unless you’re performing very basic tasks.

Unfortunately that means you’ll get just about 4 hours of run time with NVIDIA ION graphics enabled, and 5.5 hours with integrated graphics. 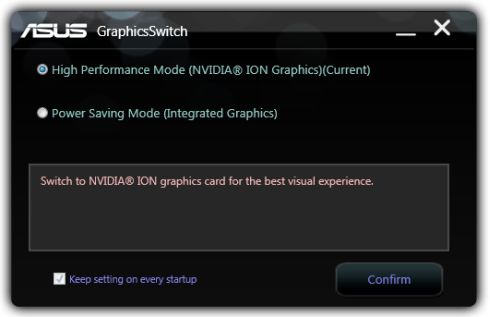 Since Windows 7 Starter doesn’t support automatic graphics switching, you’ll have to reboot every time you want to change — which means that even if 90% of what you’re doing doesn’t require HD graphics, but you think you might want to watch an HD video on YouTube at some point, odds are that if you’re lazy like me you’ll just leave ION enabled — unless you really need that extra hour of battery life.

I should also point out that my demo unit had a 56Whr battery. It’s possible that not all versions of the Eee PC 1015PN will come with the same battery.

The Eee PC 1015PN is one of the most powerful 10 inch mini-laptops around, thanks to its dual core processor and NVIDIA ION graphics. But if battery life is more important to you than graphics performance, there are literally dozens of netbooks that offer better battery life, so this might not be the best option for you. 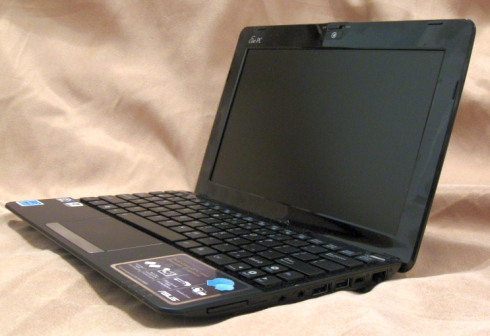 On the other hand, if performance is what you’re after, the Acer Aspire One 521 has a faster processor, can handle HD video playback, and runs for about 5 hours on a charge without disabling the high performance graphics card. Sure, its graphics card might not be quite as powerful as the one in the Asus Eee PC 1015PN, but honestly, the difference isn’t that great.

Neither machine is designed to play bleeding edge games, but both can handle older games and high definition video just fine. The main difference is that the Acer laptop is about $80 less than the $429 Eee PC 1015PN.

There are some subtle differences which might make the Asus netbook the better choice for you though. It has a matte display a chiclet-style keyboard, for instance, if that’s worth $80 to you.