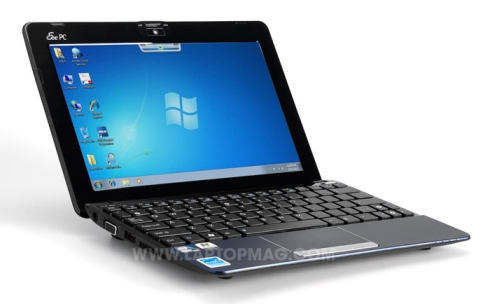 The Eee PC 1015PEM is the 10 inch netbook from Asus with a dual core Atom N550 processor. Physically, the laptop is virtually identical to the Eee PC 1015PED that I’m reviewing, with the same seashell-style case, chiclet keyboard, and matte touchpad. But while the 1015PED has a single core CPU, the Eee PC 1015PEM gets a dual core boost. Of course that doesn’t mean it’s twice as fast, but it should be at least a little more powerful.

Laptop Magazine is one of the first institutions to put that theory to the test, with a detailed review. The Eee PC 1015PEM reportedly bested the Acer Aspire One D255 in some benchmarks, even though both netbooks have the same CPU. It also comes out way ahead of a typical single core netbook. The computer also managed to transcode a video file about two minutes faster than a typical netbook.

On the other hand, it looks like you should only expect about a 20 percent performance boost in overall computing tasks, and the Eee PC 1015PEM has standard Intel GMA 3150 integrated graphics. While that should be good enough for handling 720p HD video, don’t expect to watch 1080p movies or play bleeding edge video games on this system. HD Flash video also appeared to give the laptop some problems.

You an find more details at Laptop Magazine.