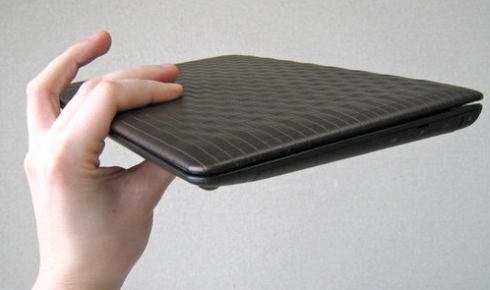 The Asus Eee PC 1008P Karim Rashid Edition is the most expensive 10 inch netbook you can currently buy from Asus. That’s largely because it’s super thin and sports a designer edition lid, more RAM and hard drive space than most netbooks and Windows 7 Home Premium. But is that enough to justify spending $500 for a netbook? Peter at Netbooked seems to think so. He published a detailed review of the Eee PC 1008P Karim Rashid Edition today.

First, let’s clear something up. The 1008P Karim Rashid Edition doesn’t just come with a pretty lid. It also has 2GB of RAM, 320GB hard drive, and runs Windows 7 Home Premium. Those things alone will clearly drive up the price of any netbook. The netbook is also slimmer and lighter than most. And while it has a relatively wimpy battery that’s only good for 4 hours, unlike the Asus Eee PC 1008HA, this model has a user replaceable battery, and even ships with 2 batteries in some parts of the globe — which means you get up to 8 hours of run time (after swapping out batteries).

I’m not a big fan of the plastic doors that Asus uses to cover the ports, because they’re sort of begging to be broken off over time. But it does give the netbook a streamlined look when you’re not using any of these ports.

Peter does point out that the fan is a little noisier on this netbook than many others. And the laptop can get rather warm at times. It also has just 2 USB ports instead of the usual3. But overall, he was pretty impressed.