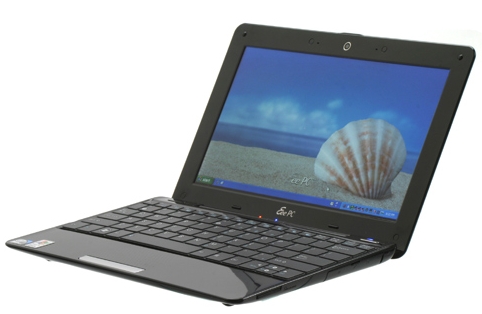 The Asus Eee PC 1008HA looks pretty, and has a nice keyboard. But inside it’s basically the same as every other Asus netbook. That’s the verdict Trusted Reviews came to after spending some time with the latest mini-laptop from Asus. Well, any other netbook with a non-user replaceable battery anyway.

The netbook also hides most of its ports behind doors to give the sides of the laptop a smoother look. It looks like Asus has developed a brand new keyboard for the Eee PC 1008HA, rather than using the new chiclet-style keyboard found on the Eee PC 1000HE and other models. The laptop makes room for a full sized right-shift key by reducing the size of the up and down arrow buttons, and uses mostly flat keys. There’s also no dedicated row of special function keys, which means you’ll have to hit Fn + Spacebar to toggle the Super Hybrid Engine application that adjusts the CPU speed.

For more details, including close up pictures of the keyboard, ports, and VGA adapter, check out Trusted Reviews. I hope to get my hands on a unit once they’re available in the US and I’ll have my own review shortly thereafter.