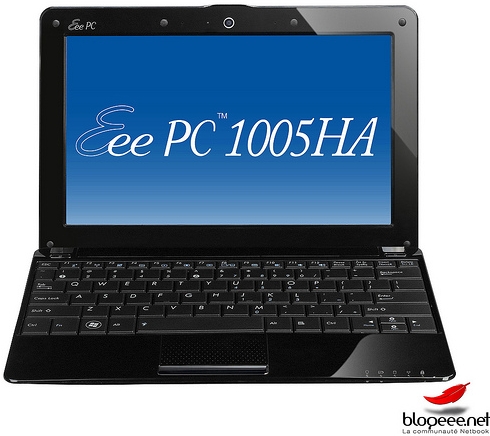 Update: Now you can read my detailed review of the Eee PC 1005HA.

You know that Asus Eee PC 1005HA I told you about the other day? Yeah, it looks like it’s real. Blogeee reports that Asus is running with the new thin and light form factor it first introduced with the Eee PC 1008HA Shell netbook by introducing a few extra products that look virtually identical. First up is the Eee PC 1005HA-M, which has a 10 inch display, Intel Atom N270 CPU, and a removable battery (unlike the Eee PC 1008HA). It will sell for about €299 in France.

Asus also has another version in the works, known as the Eee PC 1005HA-H. This model will have a €349 price tag, and sport a faster Intel Atom N280 CPU and a battery which Blogee says could run for up to 10.5 hours, although I think there might be something missing in translation, because the site also says it will be a 2800mAh battery. By comparison, the Asus Eee PC 1000HE, which runs for 7 to 9 hours on a charge, has an 8700mAh battery.

While both the Eee PC 1005HA-H and 1005HA-M will look a lot like the Eee PC 1008HA, there are a few differences. The 1005 series netbooks will measure 1.4″ thick, while the 1008HA is just 1″ thick at its thickest point. All three netbooks are the same width and length: 10.3″ x  7″.  Blogee uploaded a handy comparison chart showing more of the similarities and differences to Flickr.