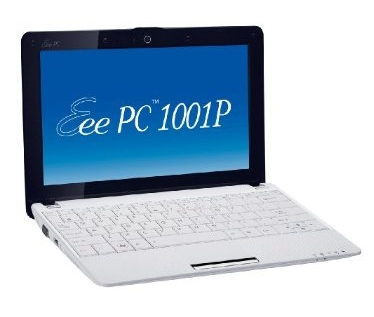 The Asus Eee PC 1001P is up for pre-order at Amazon.de, and the netbook is selling for just 249 Euros, or about $357 US. That makes it significantly cheaper than the recently introduced Eee PC 1005P/PE series netbooks, even in Europe where netbooks tend to cost more than in the US.

There are  a few things setting the Eee PC 1001P from its pricier siblings though. First, it runs Windows XP Home Edition rathe than Windows 7 Starter. And second, it has a 6 cell, 4400mAh battery while the Asus Eee PC 1005PE has a higher capacity 6 cell, 5800mAh battery. In other words, you probably won’t see the 10+ hours of run time we’ve come to expect from the Eee PC 1005PE.

Still, $357 ain’t a bad price for a low cost netbook with a next-generation Intel Atom N450 processor. According to Amazon Germany, the netbook should be available on January 6th.