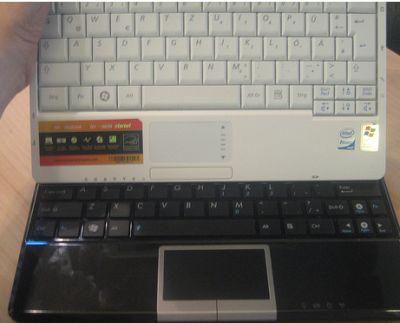 Over the second half of 2008, virtually every major computer maker, (and some companies you probably didn’t know made computer), released a netbook. While Acer and Asus topped the sales charts, most of the machines had very similar specs: 9 or 10 9inch displays, Intel Atom CPUs, 160GB hard drives, and so on. Things are starting to change this year as companies begin offering features like touchscreens, GPS, and a wider choice of processors. But many mini-laptops still share more similarities than differences. So of course, we can’t help but nitpick on the differences.

One of the most popular machines among enthusiasts last year was the Samsung NC10, which earned high marks for its excellent keyboard and stellar battery life. So far this year, one of the machines people have been getting the most excited about is the Asus Eee PC 1000HE, which has a slightly faster CPU than its predecessors and a new keyboard layout.

The folks at Netbook News.de pitted the two notebooks against one another in pictorial battle. The results? The Asus netbook clearly has a larger touchpad. The keyboard also looks a little larger, although I think both look pretty good. And the Asus Eee PC 1000HE is also much thicker and bulkier than the Samsung laptop, thanks in part to its larger, higher capacity battery. While the Samsung NC10 can easily get 6+ hours of battery life, Asus claims that the Eee PC 1000HE should be able to run for up to 9.5 hours (with the WiFi off, anyway).

The Asus netbook also costs less. You can pick one up from Amazon for $374

. But if you’re looking for a computer that’s a bit more stylish and compact, the Samsung might still be the way to go.

Check out Netbook News for more side by side photos of the two computers.