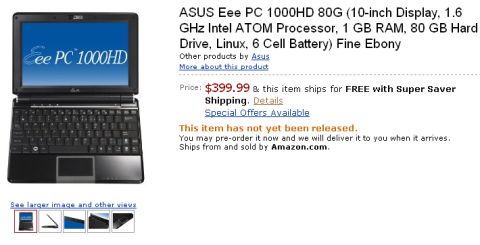 Back in July Asus announced plans to launch 2 more models in the company’s neverending Eee PC lineup: The 904HD and the 1000HD. Basically, they were to be virtually identical to the Eee PC 1000H and the Eee PC 901, except that both would have a 900MHz Intel Celeron processor instead of a 1.6GHz Intel Atom chip, and the 904HD would have an 80GB hard drive instead of a solid state disk.

Flash forward a few months, and the 904HD is already available

. And it looks like Asus is preparing to ship the 1000HD, because there’s a product page

for the netbook on Amazon. But if you look at the product description, you’ll notice that the 1000HD has an Atom processor, not a Celeron. This could be a typo on a pre-release order page. But it could also be an indication that the Atom shortage is drawing to an end. One of the only reasons Asus was reportedly sticking the Celeron chip into new computers was because there weren’t enough Atom processors to go around. If Intel has managed to address the supply problem, I wouldn’t be surprised to see Asus show the Celeron the door.

If the Amazon page is accurate, th eonly thing setting the Asus Eee PC 1000HD apart from the 1000H is the fact that the 1000HD runs Linux while the 1000H runs Windows XP. If you don’t want or need Windows, it looks like you can save $50 and go with the 1000HD. If you’re nto a fan of the Xandros Linux operating system that ships with it, it’s easy to install Ubuntu Eee or another operating system on your own.

Update: Hmm… it’s looking more and more like this netbook won’t necessarily have an Atom CPU, but rather that Amazon messed up the product description.