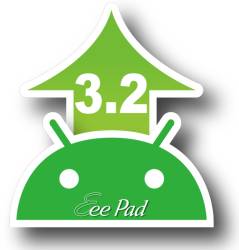 Asus is next in line to launch an Android 3.2 software update for its 10 inch Android tablet. The company announced via Twitter today that it would start pushing out Android 3.2 for the Eee Pad Transformer tomorrow.

It looks like not everyone will get the software update at the same time though. Asus Germany posted a note on Facebook suggesting that it would start pushing the software to existing tablet owners in that country wirelessly on August 2nd.

The Asus Eee Pad Transformer has a 1 GHz NVIDIA Tegra 2 dual core processor and a 10.1 inch, 1280 x 800 pixel display, just like most other tablets running Google Android 3.x Honeycomb. It won’t be the first device to be updated to Android 3.2. Motorola XOOM owners have already begun receiving the update.

The latest version of Android doesn’t really bring much to the tablet for people that are already using Android 3.1. There’s better graphics support for some apps that were designed to run on smartphones, and some other minor tweaks. The key difference is that the operating system will run on 7 inch tablets with lower resolution screens, but you don’t really care about that if you’re already using a Transformer.

On the other hand, Asus appears to be bundling one minor update of its own with Android 3.2: After installing the update you’ll be able to use multitouch gestures on the touchpad on the optional keyboard dock accessory for the tablet.