The Asus Eee Pad Transformer and Eee Pad Slider are both 10 inch tablets with 1280 x 800 pixel displays, 1 GHz NVIDIA Tegra 2 dual core processors, and Google Android 3.x Honeycomb operating systems. They also both manage to set themselves apart from the crowd with physical keyboards — but while the Transformer has an optional keyboard docking accessory with a spare battery and a $150 price tag, the Eee Pad Slider has a built-in keyboard which tucks away behind the screen when you’re not using it. 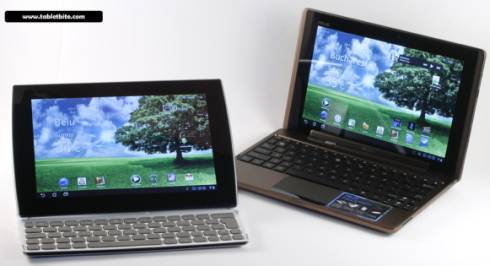 Asus has been selling the Transformer for a few months, while the Slider hasn’t yet hit the streets. But Mike at TabletBite got his hands on a Slider and he’s posted a detailed comparison between the upcoming tablet and the Transformer.

The rest of the specs are actually pretty similar, and while official pricing hasn’t been announced yet, it’s likely that the Slider will cost about the same amount as the Eee Pad Transformer with the $150 keyboard dock. That’s despite the fact that the Slider has a smaller keyboard, gets less battery life, and doesn’t offer as many ports — but I suppose you’re paying for the convenience of having one device instead of two.

TabletBite also has more information about the speakers, design, and overall performance.