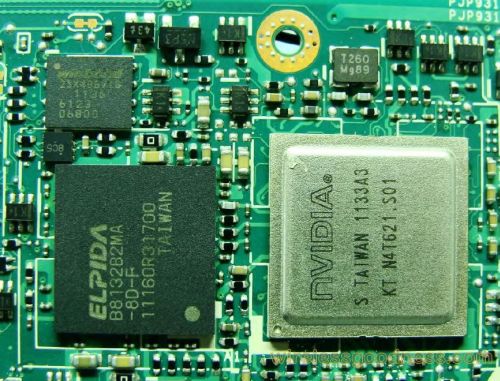 Last week the Asus Eee Pad Transformer Prime showed up at the FCC website. While most of the good stuff is still tucked away behind confidentiality requests, somehow the folks at Wireless Goodness managed to get their hands on the internal photos of the tablet ahead of schedule.

There aren’t a ton of surprises, but the photos do give us a first look at NVIDIA’s new quad-core Kal-El processor. A photo of the battery also shows that the tablet will have a 25Whr battery.

The Transformer Prime will have a Broadcom GPS chip and an Azurewave WiFi and Bluetooth chip. The FCC filing doesn’t have anything to say about the operating system, but the Transformer Prime is expected to ship with Google Android 3.2 Honeycomb and it will be upgradeable to Android 4.0 Ice Cream Sandwich in the coming months.

Asus plans to officially launch the tablet at an event on November 9th.

You can find more photos at Wireless Goodness.