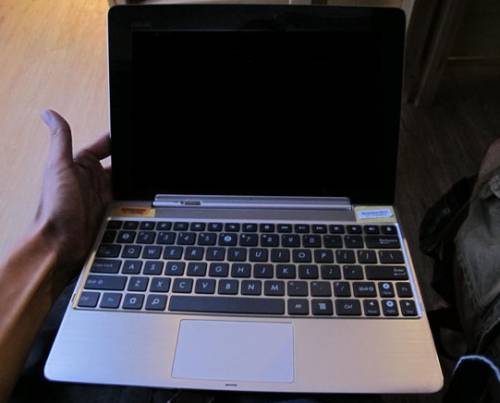 Asus is set to launch an updated Eee Pad Transformer tablet on November 9th. Chairman Jonney Shih flashed the new device at a conference recently, but we hadn’t gotten a good look at it… until now.

Photos uploaded to a Chinese forum give us a much better idea what the new Eee Pad Transformer Prime will look like. The photos have since been deleted, but Notebook Italia grabbed some copies.

Like the original Transformer, the new Prime’s key feature is support for an optional laptop dock that lets you use the tablet as if it were a laptop computer. The dock includes a full sized keyboard, a touchpad, expansion ports, and an independent battery which allows the Transformer to run longer when docked than it would if you were only using the tablet.

The new dock has an updated keyboard layout and the buttons below the touchpad have been integrated into the touch area itself.

The Transformer and keyboard dock both have a new brushed aluminum look which makes the device look a bit like the new Asus Zenbook line of ultrabook laptops.

The tablet still has front and rear cameras, but the camera on the back now has an LED flash.

Asus has already confirmed that the new tablet will have an NVIDIA Kal-El quad-core processor and measure less than 0.33 inches thick. We should know more about the tablet in a few weeks.