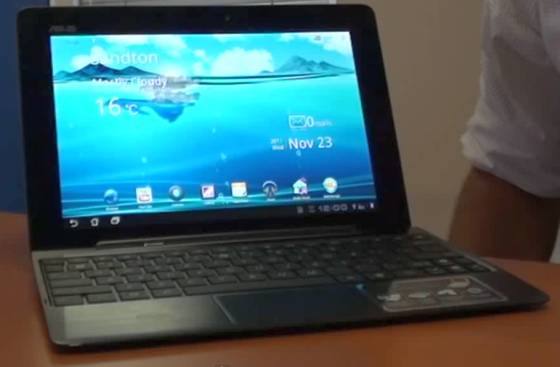 The Asus Eee Pad Transformer Prime isn’t available for purchase yet, but YouTube user rubberotter managed to get his hands on a pre-production unit and he’s posted a brief video review.

The tablet has a 1.4 Ghz NVIDA Tegra 3 quad-core processor. It will ship with Google Android 3.2 Honeycomb, but Asus will soon offer a software update bringing Android 4.0 Ice Cream Sandwich to the tablet.

In the video, rubberotter shows the tablet running a 1080p HD video without any difficulty — but that’s something that a number of tablets and smartphones on the market can already do.

The Transformer Prime also has a demo of a new version of the Riptide racing game which uses all four cores and the Tegra 3 chip’s enhanced graphics for water effects and blur effects. That’s something that’s not available on any other device yet.

The new keyboard dock is a little thinner than the one that comes with the original Eee Pad Transformer, but it has the same basic keyboard layout and the same battery capacity.

Toward the end of the video you can see that the Transformer Prime tablet is much thinner than the original Transformer, and the dimensions are very similar to those of the Apple iPad 2.

This week the Eee Pad Transformer Prime went up for pre-order for $492 and up. It’s expected to start shipping within the next few weeks.