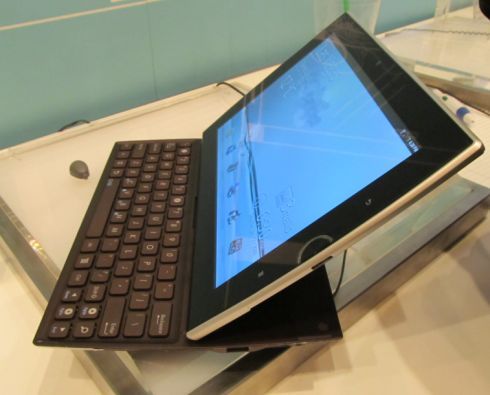 Asus introduced 4 tablet computers at CES in January. The 12.1 inch Eee Slate EP121 Windows tablet and 10.1 inch Eee Pad Transformer Android tablet are already available. But we’re still waiting for the 7 inch MeMo and the 10 inch Eee Pad Slider with a pull-out keyboard. And it looks like we might have to keep waiting.

Recently Asus promised that the Slider would launch in UK in August. Now Asus UK has posted a note to its Facebook page saying the tablet will be available this autumn. Last time I checked August was still summer — so it looks like the launch has been pushed back.

Update: I just received confirmation that the US version will also be launched this fall, sometime in the third quarter of 2011.

The Eee Pad Slider will have a 10.1 inch, 1280 x 800 pixel display, a 1 GHz NVIDIA Tegra 2 dual core processor, and a keyboard which hides away behind the display when you’re not using it. When you need the keyboard you can pull it out and set up the tablet to function like a laptop. It’s sort of like bundling the optional keyboard dock accessory from the Eee Pad Transformer with the tablet and selling it for one price, except the Slider’s keyboard is always with you wherever you take the tablet.