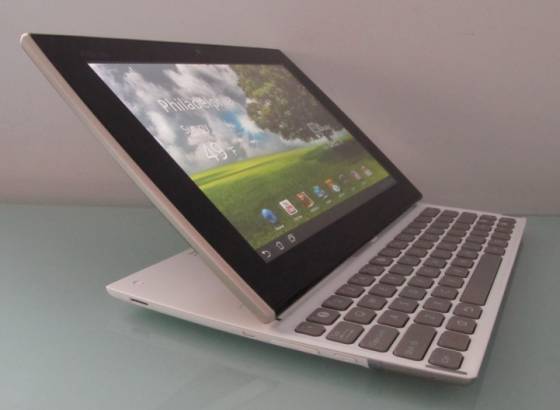 The Asus Eee Pad Slider is an Android tablet with a 10 inch screen and a slide-out keyboard that transforms the device into an Android-powered laptop. Asus loaned me a demo unit for review, and I wanted to share some initial thoughts. I’ll have more details to share soon.

It has WiFi and Bluetooth, and cameras on the front and back. The Slider currently runs Google Android 3.2.1.

But the addition of the keyboard makes the Slider a little bigger and a little heavier than most other 10 inch tablets on the market. It weighs about 2.1 pounds and measures almost 0.7 inches thick.

In other words, you can hold it in your hands for watching movies, surfing the web, or playing games — but your arms will start to feel the strain a little sooner with this tablet than with a smaller, lighter model.

On the other hand, the keyboard makes entering text much easier on the Slider than on most competing tablets. It’s not a great keyboard. The keys feel too small and too close together. But once you get used to the cramped keyboard, touch-typing shouldn’t be a problem.

There’s no touchpad on the keyboard, which means you’ll need to reach up and tap the screen for many actions. But there are special keys for home, back, menu, and search functions which can save you a little time.

In order to pull out the keyboard you need to grip a little plastic lip on the top edge of the tablet and pull up while holding the bottom of the device steady. It takes a little getting used to, but the mechanism feels pretty sturdy and I’m not too worried that opening and closing the tablet repeatedly will hurt it.

The bottom portion of the device has a nice solid feel to it, allowing you to type comfortably whether the Slider is on a tablet or on your lap. Unfortunately the screen position isn’t adjustable. It slides open to an angle of roughly 45 degrees.

The good news is that the tablet has an IPS display with a 178 degree viewing angle, which means that you can look at that screen whether it’s resting on you lap or on a desk and the images and text should be pretty clear.

Asus took advantage of the extra space provided by the keyboard portion to give the Slider a full-sized USB port in addition to a proprietary docking port for charging the tablet or connecting to a computer over USB.

You’ll also find the stereo speakers on the rear end of the keyboard portion of the device. That means that when the screen is closed, it covers the speakers and muffles the audio. Music sounds much better when the Slider is used in laptop mode than tablet mode.

If you’re looking for a thin and light tablet, you can probably do better. But if you can’t imagine buying a tablet that you can’t touch-type on, the Eee Pad Slider looks like a solid choice.

Asus also offers an Eee Pad Transformer line of tablets which have optional keyboard docks. But at $479 from Amazon

, buying an Eee Pad Slider is cheaper than getting a Transformer and a docking station. You also don’t have to worry about forgetting the dock at home. On the other hand, the Transformer is thinner and lighter (without the dock), and the dock has its own battery which helps provide extra battery life.

I’ll be testing the Slider in the coming days to gauge performance, battery life, and overall usability. I’ve spent a lot of time using touchscreen-only Android devices over the last two years, and I’ll be curious to see whether the addition of a keyboard makes the Slider useful in ways that other Android tablets aren’t.