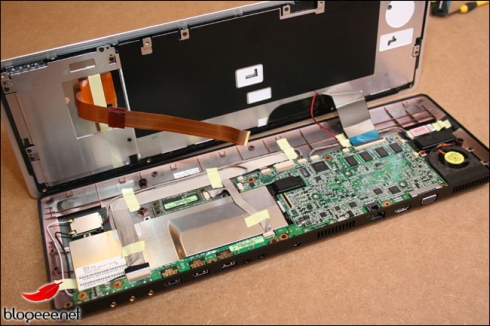 The Asus Eee Keyboard is basically a computer crammed inside a keyboard case. The idea is that users will be able to connect the keyboard to a HDTV using wireless HDMI in order to access web content on a big screen TV from the comfort of your couch. On the inside, the keyboard basically has your typical netbook components, including a 1.66Ghz Intel Atom N280 CPU, a solid state disk, and a battery. The keyboard also has a 5 inch, 800 x 480 pixel touchscreen that lets you use the keyboard without a TV/display or which can act as touch-interface for your larger display.

Blogeee has been putting an Eee Keyboard prototype through the paces for the last day or two, and today the site published the first photos I’ve seen of the computer with its top off. You can access the computer’s innards by simply removing 9 screws. Under the hood, it looks like the RAM is soldered to the motherboard, so good luck upgrading the memory. It’s also worth pointing out that there is a fan in this machine, so don’t expect it to be completely silent.

It does look like there’s a bit of extra space in there, so I imagine hackers will find ways to increase the storage capacity and provide other hacks. Usual mods like adding a GPS module won’t make much sense for a computer that’s probably not going to leave the house very often. And the Eee Keyboard already has a Bluetooth module. But I’m sure someone will think of something else to throw in there.

The computer has an 1880mAh battery, which provides less than 2 hours of run time. But since this thing isn’t really meant to leave the house, it shouldn’t be difficult to leave it plugged in while you use it.