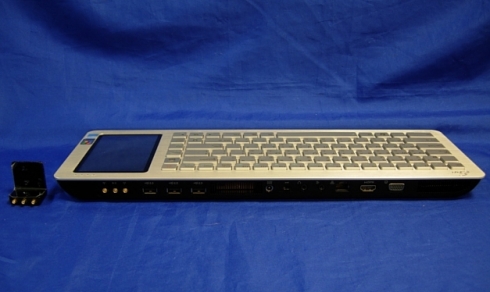 Sure, we’ve seen the upcoming Asus Eee Keyboard with its top off before. But it’s always so much more exciting when an official government body like the FCC does the dirty work for you. It makes it feel both more official, and a bit more like we’re seeing something we weren’t really meant to see.

The FCC has published a series of documents related to the Eee Keyboard, the upcoming multimedia-centric PC-in-a-keyboard from Asus. Most of the information is of a highly technical nature and has to do with wireless frequencies. But buried within one of the reports were a few photos of a dissected Eee Keyboard. If you were planning on picking one up and swapping its innards with a faster solid state disk or, I don’t know, removing the guts and just using the machine as an overpriced standard keyboard, the FCC is making it a bit easier to see what’s on the insides.

Word on the street is that the Eee Keyboard could be available in October. The fact that the FCC is looking at the computer would seem to indicate that the US could be one of the places where the machine will be available at or near launch. But not everything that passes through the FCC makes it to the US. Earlier this year, the FCC published some documents related to the Eee PC 1004DN, the first Asus netbook to sport a DVD drive. But that model was never launched in North America.