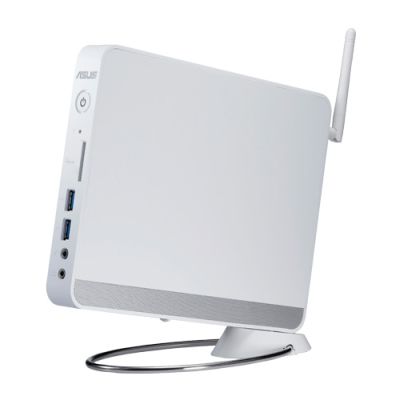 The Asus Eee Box line of miniature desktop computers have shipped with low power Intel Atom chips since day one. Sure, some models had higher performance NVIDIA graphics processors, but under the hood every Eee Box had Intel inside. But now the company is getting ready to launch its first AMD-powered nettops.

Asus first showed of the Eee Box EB1020 and EB1021 at CeBIT in Germany in March. While neither model is available for purchase yet, Asus has posted product pages on its web site with more details on each.

The EB1021 consumes between 11W and 27.5W of power which is pretty good by desktop PC standards, even if it seems like a bit of an energy hog compared to its sibling, the Asus Eee Box EB1020.

The Eee Box EB1020 uses between 9W and 19W of energy, thanks to a 1 GHz AMD C-50 dual core processor and Radeon HD 6250 graphics. In my test, this chip offers Intel Atom-like performance for most tasks, but much better performance with 3D graphics and HD video.

Aside from the chip, the EB1020 is nearly identical to the EB1021. Both models measure 8.7″ x 7″x 1.2″ and weigh 2.4 pounds. They can stand up on a desk or you can mount them to the back of a display with an optional VESA mount. Asus doesn’t say anything about the operating system for the Eee Box EB1020, but I suspect that you may be able to pick up this model with Windows 7 Starter as well as Home Premium, since the AMD C-50 chip qualifies for Windows Starter Edition.